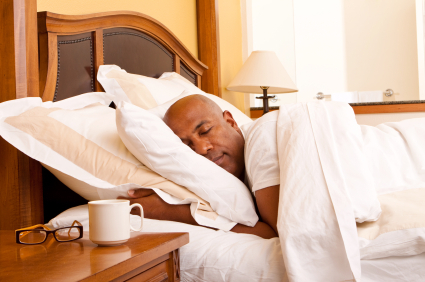 The poorer your sleep, the more likely you may be to develop Alzheimer's disease, according to a new study.

"We found that if people had a lot of awakenings during the night, more than five awakenings in an hour, they are more likely to have preclinical Alzheimer's disease," says researcher Yo-El Ju, MD, assistant professor of neurology at Washington University School of Medicine in St. Louis.

Preclinical Alzheimer's disease is the term given to people who have normal mental skills but show brain changes associated with the degenerative disorder.

Ju is due to present her findings on sleep problems and Alzheimer's disease in April at the American Academy of Neurology's annual meeting in New Orleans.

The study is preliminary. It finds an association, but not a cause and effect.

"We don't know which is the cart and which is the horse," says Gary Small, MD, Parlow-Solomon professor on aging at the University of California Los Angeles and director of its Longevity Center. Are brain changes driving the sleep problems or vice-versa? More study is needed, says Small, who reviewed the findings for WebMD. Ju agrees.

Ju and her colleagues evaluated 100 men and women aged 45-80. All were free of dementia at the study start. Half of them have a family history of Alzheimer's disease.

Ju is in the process of enrolling or evaluating another 100 people. She expects to have those results by the meeting.

For 14 days, the men and women wore a device that measures sleep. They also completed sleep diaries and questionnaires.

The researchers analyzed spinal fluid. They looked at brain scans. They were looking for indicators of "amyloid plaques." These are deposits found in the brains of people with Alzheimer's. Experts believe the deposits can begin forming 10 to 15 years before the symptoms appear, Ju says.

People slept an average of six-and-a-half hours, although they spent about eight hours a night in bed.

About 25% of the 100 people had evidence of pre-clinical Alzheimer's disease due to abnormal indicators reflecting amyloid plaques. Those who woke up most frequently, more than five times an hour, were more likely than the others to have these abnormal biomarkers.

Ju can't say exactly how much more likely the diagnosis was in those who woke up often.

Those who spent less than 85% of their time in bed actually sleeping were also more likely to have preclinical Alzheimer's disease, they found.

About half of the group had more than five awakenings an hour, and about half spent less than 85% of their time in bed sleeping, Ju says.

While waking up five times an hour sounds like a lot, she says the sleep-measuring device may slightly overestimate the number of awakenings, but that ''people actually do wake briefly quite frequently during a regular night of sleep."

Ju cites animal studies finding that sleep changes drive the accumulation of amyloid. She suspects that is the case for people, too.

"But more study is needed," she says. "We don't have any information that tells us which direction the association is."

Meanwhile, getting a good night's sleep is advised. "Everyone should prioritize their sleep," Ju says. "We don't value sleep as much as we should. Sleep is a very important function that allows the brain to rest."

"This [study] is another indication there are early brain changes [in Alzheimer's disease]," says Maria Carrillo, PhD, senior director of medical and scientific relations for the Alzheimer's Association.

Which way the association develops is yet to be determined, she says.

The study finding is not surprising, says UCLA's Small. "We know that getting a good night's sleep is important for the brain."

Of the new research, "the causal relationship is not clear," he says.

He suspects that inflammation may be playing a role. He and other experts believe brain inflammation and Alzheimer's may be linked. Perhaps the lack of sleep increases inflammation, he says. Small serves as speaker or advisor for Novartis, Forest, and Lilly.

The study was funded by the nonprofit Ellison Medical Foundation and the National Institutes of Health.

This study is due to be presented at a medical conference. The findings should be considered preliminary as they have not yet undergone the "peer review" process, in which outside experts scrutinize the data prior to publication in a medical journal.