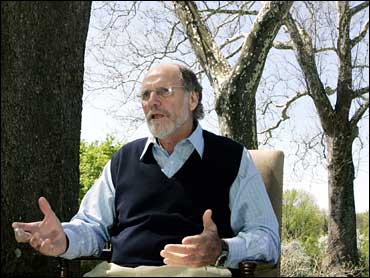 Freed from his now-decimated SUV, suffering excruciating pain from critical injuries and after being shielded by a state trooper from a nearby fire, New Jersey Gov. Jon S. Corzine said Saturday he feared his life was nearly over.

Soaring in a medical helicopter from the Garden State Parkway crash scene to a Camden hospital 50 miles away, the 60-year-old governor pondered his fate.

Through the blur, he remembered asking, "What the hell's going on here?"

"And I was trying to make the point that my chest was extraordinarily painful," Corzine said. "It scared me because I thought maybe I was going to have some kind of heart problem."

It wasn't his heart.

Corzine had broken his leg, 11 ribs, a collarbone and sternum in the April 12 crash. The governor was being raced to surgery and intensive care at the hospital that would be his home for 18 days.

Speaking in the backyard garden of the New Jersey governor's mansion in Princeton, Corzine gave his first extensive interviews Saturday since leaving the hospital Monday and beginning his long road toward full recovery.

Sitting in a chair wearing a trademark blue sweater vest atop a blue shirt with tan pants and sneakers, with his girlfriend's dog running about and his children and granddaughter nearby, a relaxed Corzine said he plans to resume his gubernatorial duties on Monday.

"We're prepared on Monday to take back the constitutional responsibilities of the governor," Corzine said. "I had a review by my doctors in conjunction with our lawyers to make sure we're in position to take on those roles. Everybody's in concurrence."

Corzine's SUV was traveling at 91 mph in a 65 mph zone just north of Atlantic City, heading to a meeting at the governor's mansion in Princeton, when the crash happened.

The meeting was with just-fired radio show host Don Imus and the members of the Rutgers women's basketball team, about racially insensitive comments made by Imus about the team.

The crash happened when the governor's SUV was clipped by a pickup truck and slammed into a guard rail. The pickup had swerved to avoid another vehicle that was trying to get out of the way of the governor's SUV.

Corzine wasn't wearing his seat belt, as required by state, but he voluntarily paid a $46 fine on Wednesday and apologized to the state.

"I thoughtlessly had not put on my seat belt, and it's a steep price to pay," Corzine said. While he said he will now always wear his seat belt, Corzine said riding without a seat belt wasn't uncommon for him.

"I'm one of those old guys that grew up where it wasn't a part of the habit, but there's no excuse," Corzine said. "I've been yelling at my kids for years about it. It was wrong, and I'm paying the price."

He repeatedly asked the public for forgiveness as he spoke, but added, "Nobody's madder at me than me."

The governor doesn't recall much from the crash.

"I had a pile of papers in my lap that I was working on while we were on our way," he said. "I was engrossed in that, which I typically am, sending off a to-do list to whoever I happened to be picking on at that moment, and editing papers. I trust the people who are driving the car, so I wasn't paying attention to what they were doing."

He remembers the car getting clipped.

"And the next thing I know we're in a slide, with the driver's side going towards the guardrail," Corzine said. "I know the moment of impact. The next thing I recognize is I'm laying in the back in unbelievable pain."

He insisted he didn't know the car was going 91 mph.

"I don't pay attention to the driver in general," Corzine said. "The one thing I will say about this: We were in traffic. I don't know how we were going that fast unless traffic was going that fast."

How does he not know how fast he was being driving?

"I was working," he said. "That's what I do in the car. I don't do much other than that. That, and phone calls and sleep on occasion."

Although a state police review board is examining the crash and a special state commission is analyzing the special state police unit that protects the governor, Corzine had only praise for the state trooper who was driving, Robert Rasinski.

"I can tell you with almost certainty — 90, 95 percent certainty — Rob was doing his job, and I feel Rob in many ways protected me and went well beyond the call of duty," Corzine said.

And Corzine is still marveling at a state trooper named Sgt. Jim Ryan, who was following the governor in a second vehicle.

"This I have to say is one of the most extraordinary things I've ever experienced in my life," he said, describing how Ryan covered Corzine with his own body to protect him from a nearby fire that was quickly extinguished. Corzine said Ryan, "Basically put his life at risk at a time when I was helpless."

Corzine said he hasn't given any thought to what might have happened had he worn his seat belt.

The governor's given plenty of thought to the intensive physical therapy he'll undergo.

"It's stressful in the leg, but they're working very hard to get my flexibility back," Corzine said. "I can now ride a bike and do 360 degrees on that bike, able to walk up and down the stairs, with crutches of course. I can walk around the grounds, not a speed demon, but we're able to do things that make it possible to work."

Corzine will be able to work from the governor's mansion, where he'll be able to use video-conferencing to communicate with staff and others, but won't be out and about throughout the state.

"It will be important that I discipline myself, husbanding my energies, making sure I eat and do the things that both the therapists and doctors want me to do," he said. "But I don't have any concern about us being able to do that. I think it can be done. I think I'll heal. I think I'll be as strong as I was hopefully by the end of the year, and I don't think it's going to take that long for the public to see me walking and moving around."