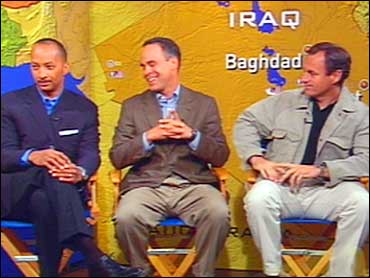 For the first time, the United States military decided to let reporters cover a war from the inside. In the war against Iraq, they were called embeds and they lived, slept and ate with the troops.

And as CBS News' Byron Pitts, Jim Axelrod and Mark Strassmann learned, it meant being under fire, too.

Before the embedding, there was a bit of debate whether or not it was going to work. The three tell The Early Show co-anchor Harry Smith it worked wonderfully well.

"In my particular case," Strassmann says, "the access was actually better than I would have thought. We spent time in briefings, saw the war gaming, and the battle strategy before it was going to happen. So we would learn it in real-time what was going on."

Strassmann was on the scene for the alleged fratricide incident in which a grneade was rolled into the officer's tent. His camera was right there, and his video appeared shorly afterward on The Early Show, uncensored by the military.

"It was the first real test of the whole embedding process because it's obviously a story that the military would rather not have happened," Strassmann says. "It was an awful thing. Both the attack itself and then the startling thing, of course, was when the perpetrator allegedly turned out to be a U.S. sergeant. And so it really was an early test of whether this thing was going to work."

There was some negotiation with the pictures, he says, but he was impressed by the openness he found in the military.

"I said there's nothing in the rules of engagement of the embeddings that says we can't release video," Strassmann says. "They were actually great about it. It was startling for a couple of reasons. One, it only happened one tent away from where I was; two grenades went off. And the second thing was just how open the military really was about the whole thing. I give a lot of credit to this colonel who was in charge, Col. Ben Hodges. He was just great about the whole thing."

Axelrod gave high marks to the equipment provided by CBS, which he recalls allowed him to be on the air seven minutes after conflict started.

"We could literally be in the middle of a firefight and literally show war, like I'm not sure it had ever been broadcast before," he says. "Primarily because of the resources we were given, and the two veterans, Mario, veteran 27 years and 16 conflicts, and Jeff our technician. That was, by the way, where we lived the last week of the war, an Iraqi Airways luggage container."

Byron Pitts had a close call on the streets of Baghdad by the oil ministry on the day the Iraqi capital fell.

"I was with Mark Laganga, CBS News cameraman, and that was as close as we thought we would come to death," Pitts says. But it also meant being close enough to see military leadership in action.

"To me, one of the great moments was the captain in charge of Lima Company, 31 years old from Harrisburg, Pa., who remained so calm in such a difficult situation," Pitts recalls.

"Marines were on their stomachs. I was laying on my back and this guy sat up ankles crossed and very calmly made decisions. There was one point where one of the young corporals said, 'Sir, we spotted where the fire is coming from. There are three people, let me take the shot.' And he said, 'Have you identified their weapons?' He said, 'No, sir.' He said, 'Do not take the shot until you can confirm the weapon.' The corporal pushed. He said, 'No, not until then.' Moments passed, and we saw the three heads bobbing up and down. We all assumed - the bad guys who were firing. And moments later, a man, his wife, and daughter stood up. This captain made the right call. Three people are alive today because this Marine made the right call. We talked later about it. I said, 'How were you so calm?' He said, 'Byron, trust me, on the inside I was as frightened as anyone. But I had to keep my men calm. And they looked to me for direction.' That was a wonderful moment," Pitts says

He still gets emotional recalling this incident. After all the things he has seen, Pitts says, he looks forward to a good cry to let it all out.

"Whenever I come back, and I'm sure for all of us, when you come back from a big story you try and process it," Pitts says. "The one thing I look forward to, for me, is a big cry for the things that I saw. David Bloom, who's a friend to all of us from NBC. I look forward to seeing my friends. And many friends I won't see. And my heart aches for them and their families."

But the three embedded reporters are thankful for their experience. They have a great sense of respect for the military.

"You know, you come from a certain place, grow up at a certain time, a certain culture, such as the one I grew up in, you don't have a whole lot of experience with military folks before you start," Axelrod says.

"The officer corps of the United States Army that I saw, is as diligent, dedicated, and hard-working a group of men as I had ever seen, twice or triple their salaries in the private sector. And they're doing this out of commitment and conviction. Very impressive!"