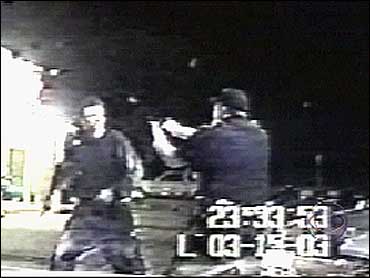 For five miles Shreveport police chased a suspected drunk driver who was weaving in and out of traffic.

Police videotape showed the suspect finally getting out of his car and pointing a shiny chrome object in what police took to be a shooter's stance.

Shots were fired, and 25-year-old Marquise Hudspeth was killed; shot eight times in the back.

The object in Hudspeth's hand turned out to be a cell phone.

And after a local investigation, all officers involved with the shooting came out with clean slates.

"We feel like they acted in self-defense and that this was a justifiable homicide," said Paul Carmouche, Caddo, Louisiana District Attorney.

But many Shreveport residents were outraged, especially members of its black community.

"That man was shot down like a dog," said one resident.

"No justice, no peace. We will burn your town down," shouted a protester.

Critics want the officers arrested, and the police chief fired.

"I hate what was done to him. It's not a day that doesn't go by that I don't miss my son," said Hudspeth's mother Larita White Jones.

"On 9-11 we were called heroes. And on other days we're the lowest of the low," said Chief Mike Halphen, Bossier, Louisiana Police Chief.

The case, which Shreveport's police chief has dubbed a "sucide-by-cop," is now in the hands of federal investigators.