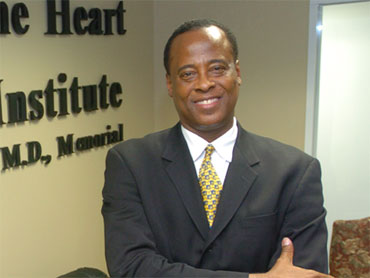 Los Angeles police are denying a Web site's report that they're treating Michael Jackson's death as a homicide.

Celebrity Web site TMZ.com, which cited "multiple law enforcement sources" in saying the investigation is indeed now is a homicide probe, also says the pop icon's cardiologist is the focus of that probe.

But Police Officer Sara Faden, speaking on behalf of the Los Angeles Police Department, tells CBS News the investigation hasn't turned into a homicide probe at this point. She adds she doesn't know where TMZ is getting that information.

"Law enforcement sources say there is already 'plenty of powerful evidence' linking Dr. Murray as the person who administered the drug to Jackson," TMZ continued, including "various items found in Jackson's house, including the Propofol, an IV stand and oxygen tank."

Neither the LAPD nor Dr. Murray has commented on the TMZ report.

Both Latoya Jackson, Michael's sister, and his father, Joe Jackson, have said they suspect Jackson was a victim of foul play.

Murray isn't the only doctor under scrutiny, Kauffman notes. A coroner's official served a subpoena on the office of Dr. Arnold Klein, a Beverly Hills dermatologist who treated Jackson for years and was a close friend.

"I mean," TMZ's Harvey Levin told CBS News, he's cooperating now. ... The coroner was frustrated, because he had asked Arnie Klein to ante up Michael Jackson's medical records, and then said, 'Where are they'? And never got a return call, and that's why the assistant coroner went out (to Klein's office)."

The federal Drug Enforcement Administration the manufacturer of Propofol for a specific batch of the medication, as part of the DEA's probe, Kauffman notes.

Another Jackson sibling, Tito Jackson, has told a British newspaper the family tried to stage an intervention on Michael's drug use, but was turned away by Jackson's handlers.

Also, in the possible custody battle over Jackson's three kids, lawyers for Debbie Rowe, who gave brith to two of them, are demanding the New York Post retract its report that she's agreed to give up parental rights in exchange for $4 million. But, Kauffman says, attorneys for Rowe and Jackson's mother, Katherine Jackson, are still talking privately, in advance of Monday's scheduled custody hearing.