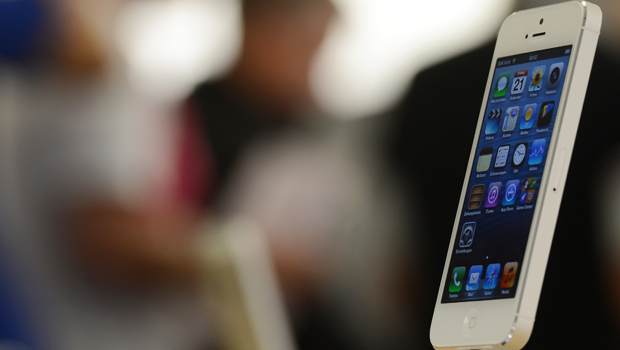 WASHINGTON Americans spent more money at retailers in September - a buying surge that reflected growing consumer confidence and the launch of the latest iPhone.

"The consumer is back," said Joel Naroff, chief economist at Naroff Economic Advisors. "They are not spending money like it is going out of style, but they are spending at a more normal pace that is consistent with a moderately growing economy."

The increase comes only 10 days after a report that unemployment fell to its lowest level since Obama took office. And it follows a survey last week by the University of Michigan that showed consumer confidence rose in early October to a five-year high.

Businesses appeared to be banking on a resurgent consumer.

A second Commerce Department report Monday showed companies increased their stockpiles in August by 0.6 percent after a slightly larger gain in July. Companies typically step up restocking when they anticipate sales will rise in coming months.

The retail sales report is the government's first monthly look at consumer spending. Consumer spending is critical because it drives nearly 70 percent of economic activity.

In September, retailers saw gains in almost every major category. That contrasted with August's retail sales, which rose almost entirely on the strength of auto sales and higher gas prices.

Sales of electronics and appliances last month swelled 4.5 percent, in part because of iPhone sales. Sales at auto dealers increased 1.3 percent. Building materials and garden supplies, furniture and clothing sales all gained, too.

Some of the September increase also reflected higher food and gas prices. If those prices continue to rise, consumers could cut back elsewhere, and that could keep growth from accelerating.

But economists pointed to a key measure of sales that rose a solid 0.9 percent without counting autos and gas station sales. Many observers say that shows consumers are not too worried.

"We saw a cautious consumer in August because they had to spend more on gasoline," said Chris G. Christopher Jr., senior economist at IHS Global Insight. "Now in September, the consumer is starting to spend more on other items. Consumers are feeling better."

Christopher said the introduction of the new Apple iPhone was definitely a factor in September. He estimated that 4 million iPhones were sold in the United States in the latter half of September.

The entire gain from electronics and appliance stores added only about 0.1 percentage point to September retail sales increase. So even excluding that gain, sales were solid, Christopher said.

Economic growth has been anemic in the first half of the year, held back by weaker consumer spending. The latest figures suggest consumers are shaking off high unemployment and the threat of tax increases that could come next year if Congress fails to reach a deal to prevent the economy from going over the "fiscal cliff."

Naroff says that threat has kept businesses from stepping up hiring. But he estimates that American consumers will help the economy emerge from the malaise that clouded the spring.

He predicts growth accelerated in the July-September quarter to a 2.6 percent annual rate - double the growth rate from spring. And he expects consumers will help the economy grow at 3.2 percent rate in the final three months of the year.

"What the recent economic reports suggest is that once the fiscal cliff issue is cleared, payroll and economic growth should surge regardless of the election results," Naroff said.

The two candidates face off Tuesday in a town-hall debate at Hofstra University in New York just as national polls show the race has tightened.

Most analysts say the second debate is crucial for Obama. The president may also benefit from the batch of encouraging economic figures that show the economy on the rise.

The unemployment rate dropped to 7.8 percent last month. It was the first time the rate has been below 8 percent since January 2009.

One caveat emerged from a survey of households: Many of the new jobs were part time. A separate survey of employers showed only modest job growth.

Still, the economy has added an average of 146,000 jobs a month in the July-September quarter - more than twice the monthly pace in the April-June quarter.

More jobs and lower unemployment have consumers feeling more optimistic. The University of Michigan's survey of consumer sentiment released Friday showed a reading of 83.1 for October. That's up from 78.3 in September and the highest level since September 2007 - three months before the start of the Great Recession.

Americans have also displayed their confidence by spending more on big-ticket items.

Home sales are up from last year, which has lifted home prices. When home prices rise, Americans tend to feel wealthier and spend more.

U.S. auto companies reported that sales rose 13 percent in September from a year earlier to nearly 1.2 million. Analysts think sales could hit 14.3 million this year, up from 12.8 million last year.

The Federal Reserves' aggressive new policies could lower long-term interest rates even further, another factor that could keep sales rising.

"Consumers still are facing a lot of problems," Christopher said. "But we are seeing some positive signs."