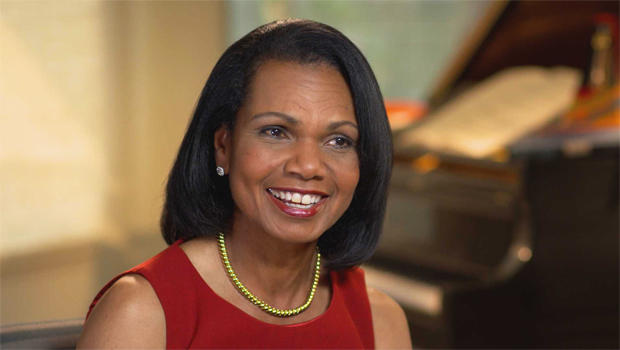 This morning Jane Pauley has questions for, and answers from, Condoleezza Rice, a first-hand eyewitness to huge changes overseas and here at home:

Her eight years in the White House, as National Security Advisor and Secretary of State, were perhaps preordained. From the age of four, Condoleezza Rice (an only child) was president of her family.

"I was elected every year," she said. "And it had real responsibilities. For instance, if we were going to leave for Denver from Alabama, I'd call a family meeting. We'd decide when we were leaving, what were we taking for food, all of those sorts of things. My parents were just giving me a sense that I could have authority and be confident."

And did she vote for herself?  "I did vote for myself!" she laughed.

Those annual trips to Denver were not for summer vacation.

"If you were black, you couldn't go to the University of Alabama for graduate school in 1961," she said. "And so my father, who was getting an advanced degree in student personnel administration, and my mother, who was qualifying to teach music in the schools -- she was a science teacher before that -- would go to Denver."

But at age 17 she went to the Aspen Music Festival and School, where she met "12-year-olds who could play from sight what it had taken me all year to learn. And I thought, 'I'm going to end up one of those people who plays as you shop in the department store or something like that. But I'm not going to Carnegie Hall!"

So halfway through college, inspired by an international relations course taught by the father of future Secretary of State Madeleine Albright, she changed her major.

"I went back home and I said to my parents, 'I found, I want to be a Soviet specialist.' They said, 'You go for it.'"

And she did. With a new Ph.D., she found a home at Stanford, where as a young assistant professor she was noticed by a guest lecturer: President Ford's National Security Advisor Brent Scowcroft.

"When you're young, you want to ask a question that people notice," Rice said. "And so it was probably slightly sharp, maybe even a little rude."

But it took her career into a new, higher orbit. "Brent came over afterwards and he said, 'I'd like to get to know you. And I want you to start going with me to the Aspen Strategy Group,' which was where a lot of the foreign policy establishment met."

And when Scowcroft was named National Security Advisor by President George H.W. Bush, she went to the White House as a Soviet specialist.

Twelve years later, she would return as National Security Advisor to President George W. Bush, and later Secretary of State.

Today, back at Stanford, Rice is best remembered for that post-9/11 decision to invade Iraq in 2003.

Pauley said, "The world with Saddam Hussein in it, he was a bad man. But no weapons of mass destruction. And then Al Qaeda in Iraq becomes ISIS, which is arguably far worse than Saddam Hussein was."

"Well, we have to get the timeline right here," Rice said. "First of all, what you know today can affect what you do tomorrow, but not what you did yesterday. And so we did not know at the time of the invasion that there were no stockpiles of weapons of mass destruction."

Despite eight years of war and the toll in lost lives and untold sacrifice, her conviction that it was the right decision has not wavered.

The title of her latest book is "Democracy: Stories from the Long Road to Freedom" (Twelve), about the struggles for democracy she knows most intimately, including our own.

She calls the civil rights movement of the '60s, when she was a growing up in Jim Crow Alabama, "the second founding of America."

"We forget in the United States how long it has taken us to make 'We the People' mean people like me. And indeed, I do think that America was born with a birth defect; it was slavery.

"And so I do think that when we were finally able to deliver the promise of the Constitution to people like me, little girls growing up in Birmingham, Alabama, when finally my father was able to vote without difficulty, yes, it's the second founding of America. The first founding wasn't quite complete."

Rice made history as the first African American woman to take the oath as Secretary of State in 2005, at a time when the seeds of democracy were flowering around the world, although it didn't last.

"It was the 'purple finger' elections in Iraq," she said. "And it was a high-water mark in Egypt when they actually had an election that looked like it might be more democratic. And we'd seen the color revolution in Ukraine. And sometimes, unfortunately -- as in Russia -- you take a step backwards."

Is it really possible (she asks provocatively in her book) that one man could dismantle the institutional basis for democracy in his country in so short a time?  "I was talking about Vladimir Putin," she said.

Rice says Putin has systematically unraveled the underpinnings of Russia's nascent democracy: "What was really first was the assault on the press and particularly the electronic press. He went after his own opponents, and more lately there are adversaries who've ended up dead. But I don't believe that it is one man. What you're seeing is that the institutions just didn't get a very firm foundation in Russia."

"I don't think it can happen here."

"Nobody's ever certain about anything about democracy, because it is always a work in progress. But the United States has such a DNA about not having executive power be too great."

"That may be true," she laughed. "I've spent a lot of time with Vladimir Putin."

But Condoleezza Rice is unequivocal that Russia interfered in the 2016 U.S. election.

"I'm appalled," she said. "But if you ask me about the psychology of it, yes, I am a Russianist. And yes, I know Vladimir Putin. And that's why I say, 'Don't give him the satisfaction of thinking that he undermined our confidence in our own elections.'

"He's an eye-for-an-eye kind of guy. We called his elections fraudulent in 2012, and they were. And so now he's going to make ours fraudulent."

Characteristically blunt and outspoken, Rice called on Donald Trump to withdraw as a candidate for president last October, posting on Facebook:

But this spring she accepted an invitation to the White House.

When asked to comment, she explained, "My meetings with presidents of the United States are a private affair. But I will say this: I respect the presidency and the person who Americans elected. And I will do everything I can to try to make sure that on behalf of all of us he succeeds."