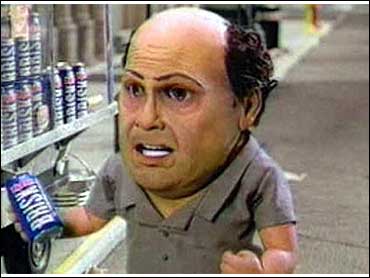 A brewer's famous Clydesdales appeared to mourn the losses at ground zero. Ex-Mayor Rudolph Giuliani thanked America for supporting New York. A soda company and a carmaker reached wistfully 40 years into the past.

And then a sneaky fast-food marketer blows a dart into a woman's neck, puppets riot when they are fired from making tea ads, a woman slugs an inept suitor and danger explodes from every direction in movie ads.

Super Bowl commercials covered the whole field - from grief, gratitude and nostalgia to humor and mayhem - in the Fox telecast of New England's 20-17 upset victory over St. Louis for the NFL championship Sunday night.

Fox executives said Super Bowl ads were sold for an average of just under $2 million for half-minute units in the suspenseful game. Fox said 30 companies bought ads for 37 brands.

Brewer Anheuser-Busch was the biggest sponsor, with five minutes of ads.

In a spot for Budweiser, the Clydesdale horses pull a beer wagon from a farm through the snow across the bridge into New York's Manhattan where they appear to pause and bow at the former World Trade Center site.

But before viewers could conclude Madison Avenue had gone soft, sandwich shop Quizno's turned up with an ad showing a rival fast-food chain using a dart to get a consumer to "dive" into its sandwich in a taste test.

Lipton Brisk executives fire the puppets from their ads after discovering the new formulation sells itself, and the puppets start a noisy, messy protest.

In a Bud Light ad, the roly-poly ladies man Cedric returns to advise a friend at a bar about how to get an attractive woman's attention. But she slugs the friend when he parrots a line Cedric meant for the bartender.

The movie companies evidently feel the country is ready for some gory action - there was mayhem aplenty in ads for new films like "Collateral Damage," "Scorpion King," "Bad Company" and "Blade II."

There were some serious messages as well aimed at discouraging consumers from buying drugs and cigarettes.

The White House Office of National Drug Control ran two ads that warned those who buy drugs may be helping terrorists get money.

Marlboro maker Philip Morris ran two ads that encouraged parents to warn their children about smoking. The American Legacy Foundation, which is financed by part of the tobacco industry's $206 billion legal settlement with the states, also ran two ads trumpeting the dangerous chemicals in cigarette smoke.

A mystery was also solved in the Super Bowl - AT&T Wireless is the company behind those ads that have been asking if you have an "M-Life." It's a term the phone company hopes will catch on for mobile phones.

By Skip Wollenberg © MMII The Associated Press. All Rights Reserved. This material may not be published, broadcast, rewritten, or redistributed