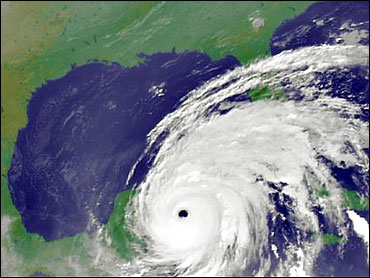 In an eerie echo of Katrina and Rita, Hurricane Wilma, the most intense Atlantic storm ever recorded, swirls menacingly as people either walk around helplessly or run for their lives. But are human beings doomed to let hurricanes have their way with us?

Firefighters conduct controlled burns to limit future blazes while resort owners shoot mortars into mountainsides to trigger avalanches when slopes are deserted, rather than packed with skiers. Similarly, inventors and scientists hope to stymie hurricanes, or at least make them kinder and gentler.

The Massachusetts Institute of Technology's Kerry Emanuel thought spraying fish oil on the ocean's surface would decelerate a hurricane as it passed overhead. Experiments in 2002, however, suggested that high winds would disperse such beneficial oil slicks as storms approached.

Peter Cordani — CEO of privately held Dyn-O-Mat, Inc. — has an even more intriguing idea. His Florida-based company produces Dyn-O-Gel, a polymer that gobbles 1,500 times its own weight in water. It currently helps make diapers absorbent. Cordani envisions airplanes dropping Dyno-O-Gel into hurricanes to deprive them of moisture and energy. This powder "turns into a gel, like JELL-O, and harmlessly reliquifies when it hits salt water," he tells me.

"The hurricanes are winning the war," he adds. "If you take a pie-shaped piece out of the eye of a hurricane, it causes the winds around the eye to work against themselves. If you can slow a hurricane by 12 to 15 MPH, you can take it down one category. We're talking about using $8 million worth of product to slow a hurricane that could cause billions in damage."

Cordani's Dyn-O-Storm plane Can We Really Expect to Stop a Storm's Fury?Cordani's efforts recall the U.S. government's Project Stormfury, a 1961-80 weather-modification initiative. In 1969, it seemed to reduce Hurricane Debbie's wind speeds repeatedly from 115 to roughly 80 MPH. There was, however, no proof whether natural forces or planeloads of silver iodide hindered Debbie.

Beyond inconclusive science, Stormfury had a political side. "The reason I got out of it was because there was so much hassle and so much unpleasantness that it got impossible to do any work," researcher Dr. Joanne Simpson complained in a 1989 interview. "More time was spent dealing with the politics and putting out the fires than in trying to learn about hurricanes."

Cordani adds, "There's technology at my fingertips that they didn't have 40 years ago." In addition to silver iodide, Uncle Sam battled hurricanes with cement, which absorbs roughly its own weight in water. It was thus only 1/1,500th as efficient as Cordani says Dyn-O-Gel is.

Scientists disagree on this idea's merits.

Hurricane fighters "fail to appreciate the size and power of tropical cyclones," says the appropriately named Dr. Christopher Landsea, Ph.D., science and operations officer at the National Hurricane Center in Miami. "For example, when Hurricane Andrew struck South Florida in 1992, the eye and eye wall devastated a swath 20 miles wide. The heat energy released around the eye was 5,000 times the combined heat and electrical power generation of the Turkey Point nuclear power plant over which the eye passed. The kinetic energy of the wind at any instant was equivalent to that released by a nuclear warhead. Perhaps if the time comes when men and women can travel at nearly the speed of light to the stars, we will then have enough energy for brute-force intervention in hurricane dynamics."

Dr. Jay Lehr, Ph.D., a hydrologist, concurs. "My personal belief is that it would have no significant impact on the strength of a hurricane," he says. "Having studied weather for over 50 years, I am aware that man's ability to significantly alter weather simply does not exist." Still, Lehr, senior scientist with Chicago's free-market Heartland Institute, adds: "If it could be attempted at non-governmental expense and little risk to life, it could be an interesting experiment."

Two distinguished scientists who advise Dyn-O-Mat are, naturally, more sanguine about this concept.

"The awesome power of hurricanes was made obvious by Andrew, Katrina, and Rita," says Dr. Peter S. Ray, Ph.D., professor of meteorology at Florida State University. "Do we accept this as an inevitable fact of nature, or can we reduce the losses due to hurricanes? If we can reduce those losses, I think it's socially incumbent to do so."

Ray, who helped pioneer the use of Doppler radar for weather observation and prediction, is buoyed by the computer measurement and modeling techniques now available to researchers that were mere pie in the sky during Project Stormfury. He adds: "My view is that the goal of the Dyn-O-Gel project is to find a way, if possible, to mitigate or eliminate hurricanes . . . The important thing is to see if it works and, if so, add it to the arsenal against hurricanes. We can't do any worse than what we are doing right now, which is nothing."

"This is a piece of cake compared to Apollo," says Dr. Edgar D. Mitchell, Ph.D., who piloted Apollo 14's Lunar Module in February 1971. "All we have to do is try it and see if it works or not. The question is . . . finding the right balance between hitting a hurricane when it's so big that it takes several large aircraft loads of material dumped on it, versus a smaller size where you're not quite sure whether it would have been necessary to attack it in the first place."

"I'm in Florida and have been through a few hurricanes," Mitchell adds. "If we get hit with two or three of these whoppers and the destruction in lives and property is enormous, you might think someone would be willing to spend a few million to see if we can slow these things down a little."

Dr. Patrick J. Michaels, Ph.D., a University of Virginia professor of environmental sciences, wonders about the effects of tampering with hurricane eye walls. "The winds might not be as strong, but the wind field expands," he says. "Instead of a small, tight little storm, you get a broader, weaker one, perhaps with more widespread damage."

Nonetheless, Michaels, a Cato Institute senior fellow and self-described applied climatologist, welcomes further research and discussion. "A severe hurricane is a political event," he observes. "In the 21st Century, we are going to develop the technology to give us the climate and the overall global temperature that we want. Anybody who has thought about this is aware of this because of the nature of greenhouse gases and biotechnology. If that's the future, and I believe it is, is it not legitimate to ask if we should be able to modify tropical cyclones slightly? Could we actually develop that technology? It's time to get that debate into polite company."

Peter Cordani says he has secured $100 million in private financing from domestic and foreign investors who he will introduce at a ceremony next month at the Lakeland, Fla., airfield from which he plans to conduct Dyn-O-Storm's anti-hurricane operations. Let's wish him well.

With the Western Hemisphere evidently facing an approximately 30-year cycle of heightened tropical-storm activity, it is wise to accelerate this research. Insurers, who could avoid billions in potential losses, should help fund it. Congress should redirect some of its $24 billion in recently enacted transportation-pork outlays to learning if Dyn-O-Gel, barge-based jet engines, or other innovations could win a War on Hurricanes. The alternative is even higher future spending to address extensive devastation, displacement, and death.

While Americans rebuild New Orleans and the Gulf Coast, the nation that landed a dozen men on the Moon and brought them safely home should answer this question definitively: Can't we just say "No thank you" to hurricanes?

New York commentator Deroy Murdock is a syndicated columnist with the Scripps Howard News Service and a senior fellow with the Atlas Economic Research Foundation in Arlington, Va.
By Deroy Murdock. Reprinted with permission from National Review Online