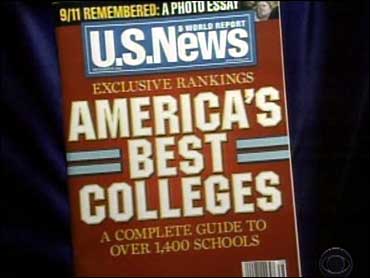 On their fifth campus tour in just three days, Frank Defiore and his daughter Caitlyn are feeling a bit overwhelmed.

"It's a lot of pressure. You're gonna live there for four years so it better be the right fit," says Caitlyn.

Caitlyn and her father, Frank, say they'll probably visit at least 20 schools in all.

With more kids applying to more colleges than ever, weeding out the "target" schools from the "safeties" has become a daunting task. Joie Chen reports.

"There's so much to look at, all these schools," says Mike Sullivan, a high school senior.

Campus visits are often cited as the best way to match student to school. But colleges are well aware that prospective applicants also study the annual U.S. News & World Report rankings, hoping their choice is at the top of the list.

"You want the best for your child, right? And you want them to go to the highest ranked school that they possibly can, typically," says Frank Defiore.

But that yardstick frustrates many college presidents. They say rankings are just status symbols, especially since the magazine asks them to evaluate other schools — the biggest factor in the U.S. News equation.

"That's the problem with it. It's like a beauty contest, and no person could know 260 schools well enough to rank them," says Kate Will, president of Gettysburg College.

Will chairs the "Annapolis Group," an organization of 125 liberal arts colleges. The group includes big-name institutions along with a number of smaller schools. This week a majority signed onto an effort to stop contributing to the U.S. News survey. The president of St. John's College called the report "evil."

"It's all about business for them, and it isn't all about students and education," says Will.

Most of what goes into the rankings is on the record anyway, such as SAT scores, graduation rates and faculty student ratios. Some schools may not want to play along, but the magazine intends to keep on rating them.

"We're going to do the rankings with or without the cooperation of the schools. The rankings are not designed to make the schools happy, they are designed for parents and students," says Brian Kelly, an editor at U.S. News & World Report.

The college group plans to put out its own review, one it says will help students better rank schools for themselves.