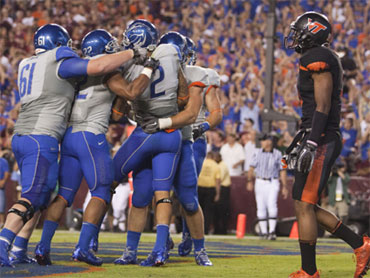 (CBS/AP) More AP Top 25 voters are buying into Boise State as the No. 1 team in the country.

Boise State gained seven first-place votes and closed in on No. 1 Alabama and No. 2 Ohio State as the top three teams in the first regular season Associated Press football poll held their spots from the preseason.

The Broncos remained third after a thrilling 33-30 victory against Virginia Tech on Monday night, receiving eight first-place votes and 1,399 points from the media panel, 13 points behind the Buckeyes.

Alabama had 47 first-place votes, down seven from the preseason poll, and 1,484 points in the rankings released Tuesday.

TCU from the Mountain West Conference moved up two spots to No. 4, marking the first time since the Bowl Championship Series was implemented in 1998 that two teams from conferences without automatic BCS bids have been in the top five. Boise State is the defending Western Athletic Conference champion.

Texas remained No. 5 and received one first-place vote.

No. 8 Florida dropped four spots after a sloppy 34-12 victory against Miami (Ohio) and No. 10 Oklahoma fell three places after beating Utah State 31-24.

No. 13 Virginia Tech dropped three spots after Boise State scored a touchdown with 1:09 left to beat the Hokies at FedEx Field in Landover, Md.

Falling out of the rankings after close opening losses were Pittsburgh and North Carolina. Moving in were No. 23 South Carolina and No. 24 Stanford.

But the big story is Boise State and the Broncos very well could be the talk of college football all season.

They entered Monday with their best preseason ranking and a legitimate chance to be national championship contenders — if they could beat the Hokies and then flawlessly navigate a schedule with no games more difficult than the first.

Boise State jumped to a 17-0 first-quarter lead, watched that lead evaporate, then needed a two-minute drill capped by a 13-yard touchdown pass from Kellen Moore to Austin Pettis to win its 15th straight game.

"This was no fluke," said voter Brett McMurphy of AOL Fanhouse, who had Boise State No. 1 this week. "(The Broncos) outgained Virginia Tech and hung 33 on the Hokies. The last two teams to score more than 30 against (defensive coordinator) Bud Foster's defense — Alabama in 2009 and LSU in 2007 — went on to win the national title.

"Will Boise? Who knows, but the Broncos deserve the top ranking for this week anyway."

The Broncos have finished the last two regular seasons with perfect records, but neither time was it enough to earn them a spot in the national championship game. They were beaten out by teams from the so-called power conferences with BCS automatic bids, teams like Alabama from the Southeastern Conference and Ohio State from the Big Ten.

This season could be different. Boise State doesn't have to climb over scores of teams to get into position to contend for a spot in the BCS title game, spots determined in large part by the coaches' poll and the Harris poll.

Boise State was third in the coaches' poll this week, moving up two spots. The coaches also had Alabama first and Ohio State second. The Harris poll is not released until October.

"We've just got a long tough hard season, and the bull's-eye will continue to grow, and it's just going to be one game at a time," coach Chris Petersen said.

Not hard enough to satisfy some people.

Boise State plays at Wyoming in two weeks and gets a visit from Oregon State, which opened its season by losing 30-21 to TCU, the week after. The Beavers from the Pac-10 look like the best team left on Boise State's schedule, but the Broncos have lost one regular-season game on their blue turf home field since 2001. Toledo also visits Boise State.

As for the Broncos' WAC competition, well, it's been almost no competition for the Broncos the past decade. Boise State has won seven WAC titles and is 73-4 against conference opponents from 2000-09, a .948 winning percentage that is by far the best of any major college team.

Feeling it has outgrown the WAC, Boise State will be leaving the league after this season and joining the Mountain West.

The best teams the WAC can throw at Boise State this season are probably Nevada and Fresno State, though Hawaii and Utah State flashed potent offenses while losing their openers to ranked foes.

Fresno State comes to Boise on Nov. 19. The next week the Broncos have a road game at high-scoring Nevada that on paper seems to be their toughest remaining test.

They finish with Utah State at home on Dec. 4, the same day the SEC and Big 12 play its conference championship games.

If Boise State runs the table do they deserve a spot in the BCS championship game? Ahead of an unbeaten Big 12 or Big 10 champion? How about a one-loss SEC team?

Unless the Broncos take an unexpected stumble, the debate will rage all season.