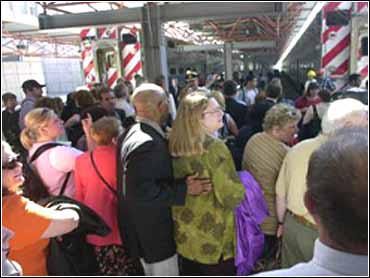 Authorities went on alert from coast to coast Tuesday, halting all air traffic, evacuating high-profile buildings and tightening security at strategic facilities following the attacks on the World Trade Center and the Pentagon.

Many federal and state office buildings were closed, as well as prominent tourist attractions — Disney World in Florida, Seattle's Space Needle, the Gateway Arch in St. Louis and Knott's Berry Farm in southern California. Even the Museum of Tolerance in Los Angeles was shut down.

Evacuations were ordered at the United Nations building in New York, and the tallest skyscrapers in Chicago, Los Angeles, Boston, Cleveland and Minneapolis.

The Securities and Exchange Commission said all financial markets would be closed for the day. The announcement followed a suspension of trading on the New York Stock Exchange and Nasdaq Stock Market. The American Stock Exchange had already decided to close.

In Massachusetts and Maine, most state employees were sent home, and state buildings shut down.

Military bases across the country went on alert. Extra security was added at the Department of Energy's nuclear weapons and research complex in Oak Ridge, Tenn., the Los Alamos National Laboratory in New Mexico, and at Fort Detrick in Frederick, Md., home to the Army's main germ warfare defense laboratory.

The Kennedy Space Center in Florida was under an "enhanced security awareness."

In Louisiana, the state police urged petrochemical and pipeline companies to be on alert. Louisiana Offshore Oil Port, which handles supertankers in the Gulf of Mexico south of New Orleans, suspended operations.

In California, Gov. Gray Davis convened a meeting of the State Emergency Council and requested heightened security in all state buildings.

In Los Angeles, the police went on tactical alert, and mobilized an anti-terrorist division. A tactical alert means officers are held over from the earlier shift to bolster the day shift and police only respond to priority calls.

In Virginia, authorities ordered intensified security at the naval complex in Hampton Roads and imposed a lockdown of offices at the state Capitol.

The horrific attacks prompted Gov. Mike Leavitt of Utah to meet with law enforcement officials to reviewing security planning for the 2002 Winter Olympics.

"It's a reminder the entire world is vulnerable to lunacy," Leavitt said. He said he was more determined than ever to have "the world's most sophisticated security" for the Olympics.

Under orders from the Federal Aviation Administration, airports nationwide halted all outbound flights, while keeping their runways open for incoming plans.

"We're like everyone else, in shock," said Carol Windham, spokesman at Birmingham International Airport in Alabama.