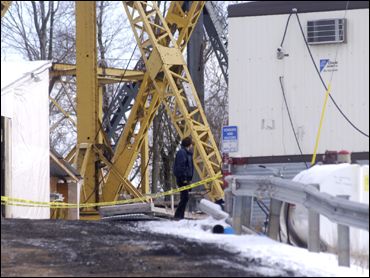 An explosion killed three people digging an air shaft for a coal mine early Wednesday and injured three others, two seriously, officials said.

The workers were about 1,000 feet underground when the explosion occurred about 1 a.m. The shaft was not connected to an active mine.

It wasn't immediately clear what caused the blast at the McElroy Mining Co. operation, however officials were investigating whether there could have been a buildup of methane gas, said Tom Hart, Marshall County's emergency services director.

The 24-foot-wide air shaft was being dug toward a coal seam that is known for releasing methane, officials said.

"They use explosives to break up the rock and take it out. They use acetylene torches to cut metal and do work. There could be any number of things that could cause this," said Thomas Hoffman, vice president of public relations for Pittsburgh-based Consol Energy, which owns McElroy Mining Co.

The third survivor "essentially walked away," said Terry Farley, administrator of the state office of Miners' Health, Safety and Training.

Farley said he wasn't sure how the three made it out.

CBS News reports the three injured workers were brought to the surface by mine rescue teams from the Blacksville No. 2 mine and the Emerald Minein West Finley, PA., and they taken to hospitals in Pittsburgh and Glen Dale.

The bodies of the three workers killed in the explosion remained in the air shaft Wednesday morning in the Navoo Ridge in West Virginia's Northern Panhandle, Hoffman said. Their identities were not immediately released.

The bottom of the shaft was several thousand feet from the active McElroy mine, so the mine wasn't affected, he said. Operations there continued Wednesday.

The workers' employer, Central Cambria Drilling of Ebensburg, Pa., could not immediately be reached for comment. Company president Jack Williamson was at the site of the accident and phones there were not working, said a woman who answered the phone at the company headquarters.

The cause of the explosion is under investigation by state and federal
company representatives, the state fire marshal and mine safety
officials, CBS News reports.

They were the first mine-related fatalities in West Virginia in 2003, Farley said. The state had six mining deaths in 2002.