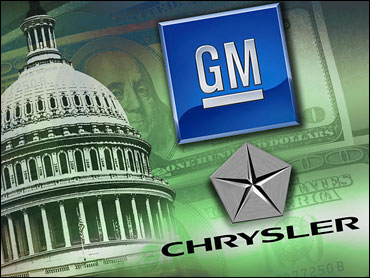 House and Senate leaders proposed a compromise plan Tuesday to give shuttered General Motors and Chrysler dealers an appeals process to keep their showrooms open.

Congressional aides said a broad $1.1 trillion spending bill would include language providing 789 Chrysler dealers closed in June and more than 1,350 GM dealers expected to be shut down next year an improved binding arbitration process to challenge the automakers' decisions.

General Motors Co. and Chrysler Group LLC said last week they would reconsider decisions to close the dealers as part of a compromise meant to set aside action by Congress to force them to keep the dealers open. The plans called for face-to-face reviews with dealerships and binding arbitration for dealers who challenge the decisions.

A compromise developed by Illinois Sen. Dick Durbin, the Senate majority whip, and House Majority Leader Steny Hoyer, D-Md., would require the arbitration panels to consider a broad range of circumstances, giving some car dealerships a better chance of surviving.

"Closed dealerships across the country deserve a transparent review of their termination and the right to get back in business if they were terminated on faulty grounds," Durbin said in a statement.

The arbiter would consider issues such as the economic interests of the terminated dealer, the company and the public, the dealer's profitability during the past four years and conditions that could have led to a poor sales performance, including natural disasters and a poor local economy.

The companies have declined to provide estimates of how many dealers could be restored through the appeals process. The legislation, which could be modified, was not expected to affect dealers who sell Pontiac, Hummer and Saturn vehicles, which are being phased out by GM.

Chrysler CEO Sergio Marchionne, emerging from a closed-door meeting with Michigan lawmakers on Tuesday, said he was confident they would reach a resolution. "Eventually we will," Marchionne said.

GM said in a statement that it was working on a "resolution that balances the interests of GM and its dealers."