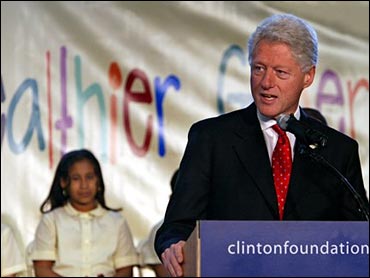 Two men from Arkansas who know a thing or two about dieting visited a Harlem high school Tuesday to warn against childhood obesity and to announce a 10-year campaign against it.

Former President Bill Clinton, whose heart disease and love of burgers and barbecue have been well chronicled, and the once obese Arkansas Gov. Mike Huckabee, who's pushing a new book about his weight-loss success, want to reverse the rapid rise of obesity among children.

"The truth is that children are consuming more sugar and fatty foods than ever before. We want to reverse the growth in childhood obesity," Mr. Clinton told children and their teachers in a school gym. "We're going to give this our best shot because we want all these children to live to be 90 years old and to be healthy doing it."

Robert Eckel, president-elect of the American Heart Association, which is supporting the initiative with the William J. Clinton Foundation, offered some alarming statistics on obesity.

"The rate has doubled in children and tripled in teens in the last 25 years," he said. Estimates are that 16 percent of U.S. children are obese and up to a third are overweight or obese. Eckel added that overweight children have a 70 percent chance of being overweight adults.

Mr. Clinton said awareness of cardiovascular disease changed the way he lives his life, and he wants to help others make similar dietary changes.

Is this a cause worthy of a former president?

"Cardiovascular disease is the No. 1 killer among Americans," Mr. Clinton said.

Huckabee, 49, who once weighed more than 280 pounds and lost 105 pounds in one year, told the school assembly that he was jolted into action after his doctor told him: "If you don't change your lifestyle, you're in the last decade of your life."

In a televised interview earlier, Mr. Clinton said he became concerned about children's weight problems after his heart surgery.
"I'm more sensitive to it because of my recent heart problems and because I had come to terms with the fact that they came about not only because of my predisposition to high cholesterol but because of decades of poor eating habits," he said on ABC's Good Morning America.

"I was overweight as a kid so I struggled with it, on and off, all my life," the former president added. "I think the consequences are enormous. You have the onset of adult diabetes in children now, plainly because of their eating habits, aggravated by the lack of exercise. We've got to change the eating habits of America's young people."

"We have a huge epidemic of obesity in our nation," Huckabee said on the show. "I realized I was digging my own grave with a knife and fork and I needed to make some changes."