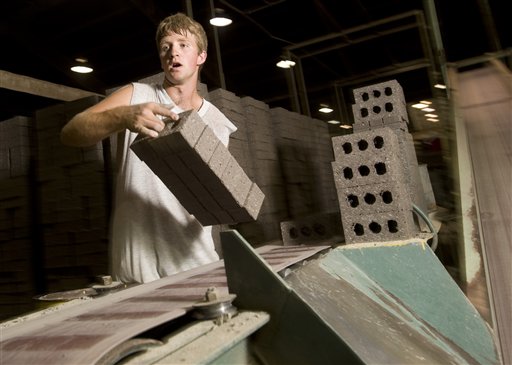 Which he's convinced that a climate bill being considered in Congress will end.

A cap-and-trade system forcing businesses away from fossil fuels, especially coal, will mean higher electricity and natural gas costs, he says. And layoffs at the Belden Brick Co.

"We're already under severe economic strain," said Belden, standing beside towering stacks of fresh bricks outside one of the six plants that ring Sugarcreek.

The town, about 80 miles south of Cleveland, calls itself "the Little Switzerland of Ohio." Signs dot the highway hailing the annual Swiss Festival, quaint bed and breakfasts, and restaurants that feature traditional Dutch Amish cooking.

A lifelong Republican, Belden said his criticism of the Democratic-run Congress over global warming isn't about politics, but economics. "We've got to compete in the world and to do so we need low cost energy," he argues.

Bills before the House and Senate would cut greenhouse gas emissions by 17 percent to 20 percent over the next decade and by more than 80 percent by midcentury. The government would cap emissions from power plants and industrial plants, forcing polluters to shift from fossil fuels or buy emission credits. Either way, energy prices will jump, though by how much is the subject of much dispute.

In Ohio, and across much of the heartland from Michigan and Indiana to the Dakotas, and in Missouri and Arkansas, where agriculture and manufacturing are the business engines, the government's effort to curb climate-changing pollution is viewed widely through an economic prism: Will it increase energy costs and drive businesses and jobs overseas to countries such as China that may not commit to similar controls on fossil energy?

Nowhere is the predicament more apparent than in Ohio. Here, 80 percent of the electricity comes from coal, unemployment tops 11 percent and more than one-quarter of million manufacturing jobs have vanished over the past decade.

"The climate change bill is all about jobs," said Sen. Sherrod Brown, D-Ohio.

With strong support from both environmentalists and labor unions, he's in the precarious position of trying to reconcile the urgent need to address climate change while assuring people in Ohio their jobs can be protected.

Brown's answers: push for more clean energy jobs _ think wind turbines and solar panels _ and make sure any bill helps offset energy price spikes and doesn't cause a plant to shut down, open shop in China and release even more carbon dioxide.

"I see it as an opportunity to make this bill work for manufacturing," he said in an interview.

It's a 30-minute drive up Interstate 77 from Belden's plants to the United Steelworkers Union office just outside Canton. Former steelworker Joe Holcomb, now a district representative for the union, says that a dozen years ago the union had 65,000 members in the state. It's now about 50,000.

Like Brown, Holcomb and union members see the climate bill debate in Washington as a path to new manufacturing jobs and way to push those numbers up again _ or at least stem the slide. That's why the national union strongly backs the cap-and-trade legislation.

If energy prices jump, Holcomb says he'll put up a windmill and generate his own power.

But he's not exactly a tree-hugging environmentalist. He recalls the push decades ago to clean up Ohio's rivers and sooty air from factory smokestacks. The water became cleaner, the air healthier, but facories closed, production became more expensive, jobs were lost, he said.

His warning to those in Washington: Don't make the same mistake.

"If we're just going to put a bill in and say we're going to clean the air ... but not create jobs, we've already seen that happen. We've got to do it in a way that's going to bring jobs into this country and not let them go out of here."

Many of the union's members work across town, producing specialty steel at a mill owned by the Timken Co., a $5.6 billion global manufacturer of high-grade precision bearings for everything from cars and locomotives to jetliners and giant wind turbines. Of its 25,000 employees worldwide, about 5,000 are in Ohio.

It's electricity bill for the steel mill and five other Ohio facilities runs as much as $50 million a year.

Ward "Tim" Timken Jr., company's chairman, said the United States has no business capping carbon pollution and fossil fuel use unless other countries act as well.

"This whole notion that the U.S. is going to lead and set the example because it's the moral thing to do is foolish," he said in an interview at the company's technology center adjacent to the Akron-Canton airport.

Timken, a member of one of Ohio's most influential Republican families, said he doesn't understand why the steelworkers would support the climate bill.

"These guys have to wake up and realize that their jobs are stake," he said.

If the bill became law, "there would be some very difficult decisions to be made, quite frankly. I've got a global footprint. A quarter of my work force is in Asia. I've got manufacturing in Eastern Europe," he said. "These are very real threats that we're talking about."

Across the Rust Belt, people on both sides of the climate issue couch their messages in terms of jobs.

A rally in downtown Cleveland in support the bill was promoted as part of a "Made in American Jobs Tour." There barely was a mention of the cap and trade idea _ and barely a crowd, maybe 50 people.

Speakers _ a mix of environmentalists and labor leaders _ talked of the "transition to a cleaner energy" and "retooling the manufacturing economy" and reducing America's dependence on foreign oil. The event was planned for the lakefront near the Rock and Roll Hall of Fame. It ended up staged in a nearby parking garage because of a sudden rainstorm.

Donald Opatka, a regional director of the Utility Workers of America, speak of the need to "transition to a cleaner energy transmission system" that will produce new jobs and save old ones.

Later, in an interview, Opatka noted the irony of his participation. Many of his union's members work at coal-burning power plants that are the climate bill's target.

"It's a real conflict for us," he said. But in the long run, climate legislation "is going to happen and we can either put our heads in the sand ... or get our oars in the water" and position workers for clean energy jobs.

At a far different rally the next day in Lima, 300 miles southwest of Cleveland, the fear is about losing jobs because of the legislation.

Lima, conservative and heavily Republican, once was a rail center and the heart of one of the nation's first oil booms more than a century ago. It's seen its share of factories close and jobs disappear. A refinery, several chemical plants, a factory making Army tanks and a Proctor and Gamble plant that makes detergent now account for much of the work.

On a Friday morning, more than 700 people have streamed into a conference room at the civic center. One-third were bused in from a Marathon Oil Co. facility in nearby Findlay. The rally is one of several dozen held around the country in recent months by the oil industry in opposition to the bill.

The crowd is a mix of oil workers, anti-government "tea party" protesters, global warming skeptics, and people just worried the legislation will send enegy bills up, more jobs overseas and factories to their end. Few believe a green jobs revolution will make up for jobs that could be lost.

"It forces too many things on people," said grocery store worker Francis German, who acknowledges not knowing its details.

One of the speakers, Andy Johnson, brought a copy of the morning paper that has a picture of people lining up at a food bank the day before at one of the two Lima bowling alleys that he owns. "We were expecting a few hundred people and over a thousand showed up," he said. "This is the wrong time to be talking about" climate legislation.

Larry Ward Jr., a chef at the Holiday Inn, had no interest in the rally. He says what people in Lima, where he grew up, are really talking about is the "same as everywhere _ health care."

But asked about what he thinks about Congress dealing with climate change, Ward calls it "a crock" and is skeptical about wind and solar energy replacing fossil fuels. But Robin Martin, a hotel cashier, sees climate change as worrisome and alternative energy as the future.

Mike Knisley, business manager for Local 776 of the United Association of Plumbers, Pipefitters and Service Technicians, describes the area as a blue-collar and farm community with a mix of industrial plants.

"For the most part people are looking for a commonsense approach, a balance" on climate change.

About eight in 10 of Knisley's union members work in heavy industries, including those at the Husky Oil refinery just outside of town. "If the refinery out there closes due to cap and trade we're out of business," he said.

About the climate change legislation, he said: "If we were in better economic times it would be a little bit easier pill to swallow. The timing is just bad."