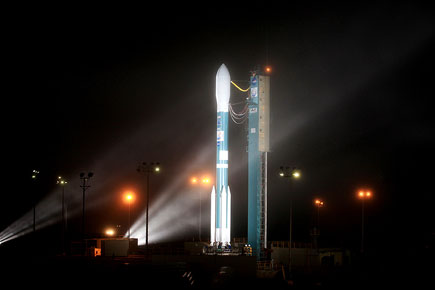 An attempt to launch an environmental research satellite atop a Delta 2 rocket at Vandenberg Air Force Base, Calif, Tuesday was called off just 45 seconds before the planned liftoff when a launch pad sound suppression water system failed to activate as required.

The launch team was protectively told to press ahead for a possible second launch try Wednesday, but NASA managers said a final decision on how to proceed would depend on what is required to fix the water system, which is used to help dampen the acoustic shock of engine ignition and to cool an exhaust flame duct at the base of the rocket.

"What we had was a mandatory called hold at T-minus 45 seconds," said launch director Tim Dunn. "What that deluge system does is it protects the launch mount from the high temperatures of the launch and gives some amount of suppression from that huge shock wave of the ignition of the engine.

"We begin that water flow at T-minus 45 seconds and there's a verification step there immediately that the engineer is looking for. (He) could not verify that his water system was operating nominally, therefore that resulted in a mandatory hold."

In any case, the Orbiting Carbon Observatory 2 spacecraft perched atop the rocket remained healthy and ready to begin a $468 million mission to measure global carbon dioxide levels, collecting data expected to shed light on how the greenhouse gas affects climate change and the role of human industrial activity.

"It's a bit of a disappointment for the launch team when you have a great countdown up to that point," Dunn said. "However, these are things you prepare for, we're a professional team, we know how to handle this."

A nearly identical version of the spacecraft was destroyed in a 2009 launch mishap caused by problems with an Orbital Sciences Corp. Taurus XL rocket. NASA managers decided the mission's scientific value warranted building a replacement, but the OCO-2 satellite was moved to a United Launch Alliance Delta 2 after a subsequent Taurus failure.

The Delta 2 rocket is one of only five left in ULA's inventory as the company completes a long transition to more powerful Delta 4 and Atlas 5 boosters. This is the first flight of a Delta 2 in nearly three years.