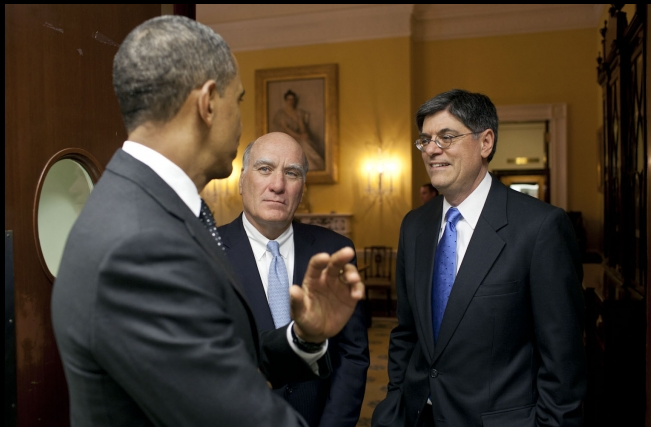 COMMENTARY Are there any high-minded presidential henchmen out there who haven't worked on Wall Street? Jack Lew, whom President Obama is tapping to replace the outgoing Bill Daley as his new chief of staff, was until 2009 a top executive at a controversial Citigroup (C) unit. Counting Obama's first chief wrangler, current Chicago Mayor Rahm Emmanuel, who also did a turn as an investment banker, that's three gatekeepers in a row who have spent time on the Street.

Not that there's anything wrong with that. Actually, there is, and it isn't just optics. Lew, a seasoned Washington player who currently heads the White House Office of Management and Budget, is, on paper, highly qualified for his latest post, which he will assume by the end of the month. He has oodles of policy experience and reportedly isn't totally despised by Republicans on Capitol Hill (if that still counts for anything).

Unlike Daley, a consummate political fixer and former JPMorgan Chase (JPM) executive whom Obama brought on in early 2011 largely to make nice with the corporate community, Lew has a long record as a public servant (if that still counts for anything). Also unlike Daley, Lew is by all accounts generally liked by his coworkers (that counts for something). And bluer Democrats will be cheered by his professional and personal ties to liberal stalwarts, including former House Speaker Tip O'Neill and the late Minnesota Senator Paul Wellstone.

That's the point. When a respected, personable, old-school Dem like Lew, handpicked by the president as his right-hand man, also spent several years working for a major Wall Street bank implicated in the financial crisis, uh, what's up with that? It's not like Lew was selling certificates of deposits at Citi, which he joined in 2006, or just before the housing bust. As chief operating officer of Citigroup Alternative Investments, he helped run the company's proprietary trading business (aka casino). Among the unit's job-creating strategies, one was to bet against the housing market, which other parts of the banking giant had helped inflate.

The Citi division ultimately lost billions. As for Lew, he naturally made big bucks during his three-year stint at Citi, including a roughly $950,000 bonus in 2009 -- after the company's federal bailout. Not all one-percenters are created equal, of course. As Mother Jones notes, Lew's good works during the Obama administration included defending social services for the poor against deficit-cutting. He also previously worked for a left-leaning economic think-tank, suggesting that his mind, if not his wallet, is in the right place.

But Lew's conscience isn't on trial here -- a resume isn't a window on the soul. What it may reveal, however, are conflicts of interest, which is troubling when the interests of the U.S. economy and those of Wall Street diverge. On that score, Lew's views appear, if not damnable, then at least questionable. During a 2010 Senate hearing to confirm him as White House budget chief, Lew seemed to soft-pedal the role of financial deregulation in the housing crash, saying, "[I don't] personally know the extent to which deregulation drove it, but I don't believe that deregulation was the proximate cause."

A nuanced, diplomatic response to a complex question, or a massive blind-spot? Hard to say. To be sure, a single statement couched in the requisite half-truths of confirmation hearings shouldn't negate an entire career. Still, it's not a good answer. There wasn't a single "proximate" cause to the financial crisis, as Lew no doubt understands. There were many causes, some more proximate than others. Like deregulation, for one, along with the enormous bonuses bankers earned for rolling the dice.

The bigger problem with Lew's appointment isn't his bountiful time at Citi -- it's what that represents. Obama is clearly comfortable bringing another ex-Wall Streeter into an administration that, beyond a recent ratcheting up of populist rhetoric, has done relatively little to rein in the financial industry.

That, in turn, reflects the ease with which Washington hands like Lew shuttle between the Street and the Hill. Case in point: Lew's predecessor as budget chief, Peter Orszag, left the agency and joined Citi as vice chairman of global banking. A job in politics is no longer a back-door to a lucrative job in banking -- it's a red carpet. The revolving door keeps spinning.

So is Jack Lew a dedicated public servant, or an unreformed pal of Big Finance? Because you can't be both.