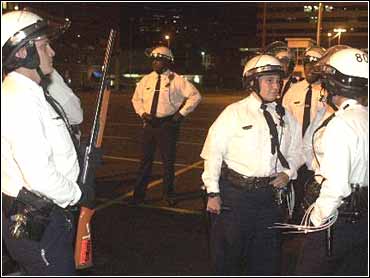 After a night of relative calm, the mayor ended a two-night citywide curfew Friday morning and urged residents to "Go out and go to dinner. ... Go have fun."

Police said several fires were set in trash bins and in a car Thursday night and early Friday, and there were at least eight reports of gunfire, but no injuries. The curfew ran from 11 p.m. to 6 a.m.

The riots came after police officer Stephen Roach shot Timothy Thomas, 19, on April 7 as the black man fled Roach and other officers. Thomas was wanted on 14 misdemeanor warrants, including driving without a license and previously fleeing police.

A judge Wednesday acquitted Roach, 27, of misdemeanor charges of negligent homicide and obstructing official business. While unrest broke out Wednesday evening, officials said it was nowhere near as bad as the April riots.

Luken, aware that the curfew was keeping customers from downtown restaurants and bars, said Friday he wanted to be sure the city had stabilized before opening it up for the weekend.

"Go out and go to dinner, watch a movie, go to a play," he urged citizens during an interview on WLW-AM radio. "Go have fun."

Roach, a city officer since 1997, had faced up to nine months in jail if convicted of both charges. He still faces departmental administrative proceedings under which he could face penalties including dismissal, police said.

By Chris Wetterich
© MMI The Associated Press. All Rights Reserved. This material may not be published, broadcast, rewritten, or redistributed