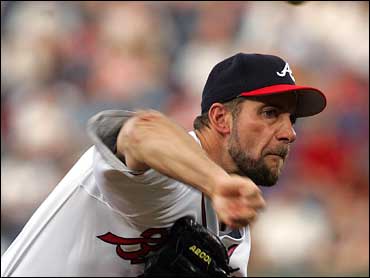 The Atlanta Braves will mix baseball with the gospel when they hold another "Faith Day" this weekend. But one of the country's most prominent Christian organizations has been tossed out of the game.

Focus on the Family, a group founded by James Dobson and based in Colorado Springs, Colo., was barred from participating in Sunday's postgame activities after sponsoring the first such event at Turner Field last month.

While the team wouldn't provide a reason for its decision, several gay rights groups on the Web bristled with speculation that Focus on the Family was given the boot for promoting its belief that homosexuality is a social problem comparable to alcoholism, gambling or depression.

The Braves were the first major league team to hold "Faith Day," teaming up with Tennessee-based promoter Third Coast Sports to put on the event after a July 27 game against Florida.

Separate $10 tickets allowed fans to re-enter the left-field bleachers, where a stage was set up along the warning track. Pitcher John Smoltz gave a testimonial and a Christian rock band put on a show.

The Braves plan the same sort of event after Sunday's game against Milwaukee, this time with former Atlanta first baseman Sid Bream as the featured speaker. However, Focus on the Family won't be one of the sponsors.

The group released a statement Friday saying the July 27 event "was first class and exceeded our expectations," but added that the Braves didn't want them to take part in the Faith Days scheduled for August.

"For Focus on the Family, our involvement in Faith Days is all about being there to support the marriage and parenting needs of families," said Rich Bennett, the group's marketing director. "The Braves game in July was a great experience for us, and we are looking forward to participating in other Faith Days and Faith Nights events with Third Coast Sports in the future."

Bennett said the group never formally committed to the August dates and suggested that any other questions be directed to the Braves, who declined comment through spokeswoman Beth Marshall.

Third Coast Sports, which has sponsored similar events at minor league games and plans another at Turner Field on Aug. 26, also declined comment, saying it was a matter between the Braves and Focus on the Family. Dobson's group will continue to take part in future Third Coast promotions.

"We anticipate them being involved in other cities," spokesman Matt Toy said.."

Five years ago, the Braves received hundreds of complaints for selling a block of about 1,700 tickets to a group leading the city's bid to land the Gay Games. In return for the large purchase, the group was recognized on the field and got to pick someone to throw out the ceremonial first pitch.

The Braves said it was merely a business decision and they weren't condoning or endorsing the homosexual lifestyle. The team took the same tact with its decision to allow Third Coast Sports to hold "Faith Day."

Focus on the Family was one of eight sponsors for the first event, joining groups such as Toccoa Bible College and the Gospel Music Channel. All were allowed to set up tables where they could hand out literature and Christian-themed items to fans as they headed back into the stadium.

But the Braves may have been troubled that Focus on the Family was promoting its Web site www.troubledwith.com, in which the group gives its suggestions for dealing with myriad problems.

Under the heading "Love & Sex," homosexuality is listed along with items such as dating, miscarriage and post-abortion syndrome. The group debunks the belief that homosexuality is caused by genetics, saying that males are often influenced by incest, molestation, exposure to pornography and negative body image.

"No solid scientific evidence exists today that people are born homosexual," the Web site says. "Interestingly enough, genetic predeterminants have also been theorized for alcoholism or depression. Neither alcoholism nor depression is embraced as healthy. Rather, we try to help people who suffer from these tendencies to find relief and recovery."

Chris Reitsma, a Braves pitcher who is recovering from a season-ending injury, is scheduled to speak at the final "Faith Day." He was unaware of the controversy over Focus on the Family.