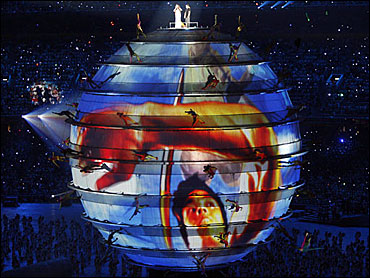 This column was written by Dave Zirin.

Joey Cheek is someone who actually believes in the Olympic ideal, the quaint notion that sports could be used as a force for good, to raise awareness, understanding and even bring people closer together. The 2006 speed skating gold medalist will now not get the chance to test his theories. Joey Cheek, the president of Team Darfur, a coalition of as many as 200 athletes aimed at raising awareness about the suffering in the Sudanese region, had his visa revoked the evening before he was to fly to Beijing.

"I didn't see it coming," Cheek said. "I figured once they gave me a visa, I wouldn't imagine they wouldn't allow me to come in later. That was a big shock. I wasn't expecting to get a call the evening before I was leaving for Beijing."

Cheek wasn't alone. Team Darfur member Kendra Zanotto, a US bronze medalist in synchronized swimming at the Athens Games in 2004, was also denied entry even though she was attending in an official capacity, as a reporter for the Olympic News Service.

The fact that China acted so abruptly, stating that they were "not required to give a reason" for these actions is no surprise. The craven response by the International and US Olympic Committee is actually bracing. No support for their own medalists when the stakes are having a games "without controversy." The irony is that Cheek and Team Darfur are a moderate force in this protest drama. They never called for an Olympic boycott and always saw the games as a place to advance dialogue more than struggle. China and the IOC might pay a price for denying this kind of presence. Already Western protesters have broken onto fields of play to unfurl Tibetan flags. This kind of high profile disruption infuriates China and the IOC. But it is also effectively harmless for China's rulers who have been adept at stoking nationalism when "western" protesters raise concerns. More problematic has been the efforts of two Beijing women Zhang Wei and Ma Xiulan -- two of the 1.5 million people displaced to make way for the games. They have been public figures speaking out about the human cost of the $40 billion games. Late Wednesday, they were taken from their homes by police, trying to clamp down on dissent. We will see if this kind of local action -- and reaction -- causes a greater headache for China than anything said or done by Joey Cheek.
By David Zirin
Reprinted with permission from The Nation