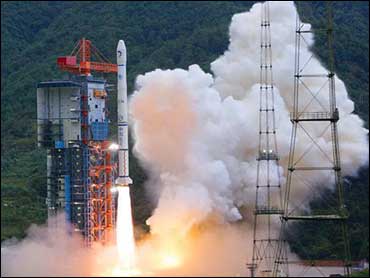 China launched its first lunar probe Wednesday, the first step in an ambitious 10-year plan to send a rover to the moon and return it to earth.

State television showed pictures of the unmanned Chang'e 1 orbiter taking off with a trail of smoke from the Xichang Satellite Launch Center in Sichuan province in southwestern China.

The launch comes just weeks after China's regional rival Japan put a probe into orbit around the moon in a big leap forward for Asia's undeclared space race. India is likely to join the regional rivalry soon, with plans to send its own lunar probe into space in April.

The Long March 3A rocket carrying the probe blasted off shortly after 6 p.m. local time after officials from the China National Space Administration said weather conditions were good for a liftoff.

Several thousand people living within 1½ miles of the launch center and under the rocket's trajectory were evacuated two hours before the launch, the official Xinhua News Agency said.

More than 2,000 tourists were also on hand to watch the rocket soar into space.

The Chang'e 1, named after a mythical Chinese goddess who flew to the moon, will orbit Earth while technical adjustments are made, and will enter the moon's orbit by Nov. 5, administration spokesman Li Guoping said when the launch plans were announced Monday.

The project's goal is to analyze the chemical and mineral composition of the lunar surface. The probe will use stereo cameras and X-ray spectrometers to map three-dimensional images of the surface, and to study the moon's dust.

The 5,070-pound Chang'e 1 is expected to transmit its first photo back to China in late November, and to conduct explorations of the moon for a year.

The launch marks the first step of a three-stage moon mission. In about 2012 there will be a moon landing with a moon rover. In the third phase about five years later, another rover will land on the moon and be returned to earth with lunar soil and stone samples, Xinhua said.

In 2003, China became only the third country in the world after the United States and Russia to put its own astronauts into space.

But China also alarmed the international community in January when it blasted an old satellite into oblivion with a land-based anti-satellite missile. It was the first such test ever conducted by any nation.

The Long March rocket had a drawing on it of a moon with an eclipse which was also designed to look like a dragon. "China Moon Probe" was written in Chinese on the rocket.

A government official said last week China hopes to join an international space station project that already counts leading space powers like the United States and Russia as its members.

China does not participate in the International Space Station, due in part to American unease about allowing a communist dictatorship a place aboard.

The space station's first section was launched in 1998 and it has been inhabited continuously since 2000 by Russian, U.S. and European crew mates.

Japan's space agency said nearly two weeks ago that its lunar probe was in high orbit over the moon and all was going well as it began a yearlong project to map and study the lunar surface.