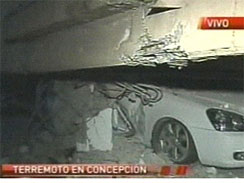 Tsunami warnings were issued for much of the Pacific, including Hawaii, following the quake that struck near the Chilean coast, killing at least 76 people.

"When the earthquake occurred, it moved the land and then it moved the water causing the tsunami," said U.S. Geological Survey geophysicist Jessica Sigala. "And the coastal areas of Chile have already noticed the wave heights up to about 7 feet."

Sigala said Hawaiians can expect to see the waves from this tsunami around 11:20 a.m. local time (about 4:20 p.m. ET). "So we have to wait and see how big the waves will be."

"It's not so much the height [of the wave] but it's the width, it's how long the duration, and then it's also the speed at which it's traveling," said co-anchor Kelly Cobiella "Correct me if I'm wrong, but these waves are traveling at the speed of a jetliner, about 500 miles per hour?"

"That's correct. It's a big block of water coming onto the land," Sigala said.

"Aftershocks are definitely a concern," said Sigala. "We always see aftershocks with a large quake and a shallow quake, which this one was. And as of right now, we've located about maybe 15 aftershocks and those are of the larger kind. I'm sure they felt much more than that.

Sigala said scientists see on average one magnitude 8 earthquake every year. "So this is very alarming for us."