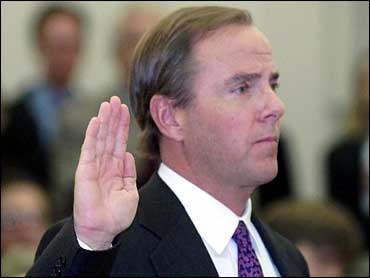 Federal prosecutors are preparing criminal charges against former Enron Corp. chief executive Jeffrey Skilling for an indictment that could come as early as next week, sources close to the case said Friday.

The two sources, who spoke to The Associated Press on condition of anonymity, confirmed the pending charges, which would come on the heels of last month's guilty plea to two counts of conspiracy by former Enron finance chief Andrew Fastow. The sources said, however, that the process was delicate and public revelation of the new case could be delayed.

"If a COO can't rely on the dozens of experts who review and recommend transactions, then no COO should go to work tomorrow, because they may find themselves indicted," said Hiler, a former prosecutor for the Securities and Exchange Commission.

Skilling, 50, was Enron's chief operating officer from 1997 until February 2001, when he succeeded Enron founder and former chairman Kenneth Lay as chief executive officer.

The Houston Chronicle, which first reported in its online edition early Friday that prosecutors were finalizing possible charges against Skilling, said that a special Enron grand jury put in an eight-hour day Thursday. The newspaper said the grand jury has been working more frequently as the Justice Department's investigation, launched more than two years ago, has intensified in recent weeks.

So far, 27 people have been charged, and nine of those, including Fastow, have pleaded guilty. But Skilling and Lay, the disgraced company's top two executives, have yet to be brought into court on charges related to Enron's implosion.

Michael Ramsey, one of Lay's lawyers, also reiterated Friday that Lay had committed no crimes. He declined comment on possible charges against Skilling.

It wasn't clear what specific charges Skilling may face, although sources said they would likely be similar to conspiracy and fraud charges filed last month against Richard Causey, Enron's former chief accounting officer. Causey, like Fastow, reported to Lay and Skilling.

Causey was indicted Jan. 21 for allegedly being a "principle architect" of a series of complicated plots to hide debt, pump up profits and polish the company's pre-scandal facade of success. His indictment noted he reported to the CEO and COO without specifically naming Lay and Skilling.

Prosecutors allege Causey, with other executives, set budget targets and manipulated numbers so the company would appear to have met those targets, fooling investors and allowing insiders to profit from higher stock prices.

Causey pleaded innocent to one count of conspiracy and five counts of securities fraud after surrendering to the FBI on Jan. 22. His lawyers said he had done nothing wrong, and that they would vigorously fight the charges. A scheduling conference in his case is slated for March 11 before U.S. District Judge Sim Lake.

A week earlier, on Jan. 14, Fastow and his wife, Lea, pleaded guilty in a package deal.

Fastow, who faces a 98-count indictment alleging he masterminded a wide array of schemes to make Enron appear profitable while skimming millions of dollars for himself, agreed to plead guilty to two counts of conspiracy and serve 10 years in prison after prosecutors no longer need his cooperation.

His wife, who had been scheduled to go to trial this week, pleaded guilty to filing a false tax form for helping hide some of their ill-gotten gains.

When Fastow was initially indicted in October 2002, one of his lawyers, John Keker, said he was hired to do off-the-books transactions and that Enron's chairman, CEO and directors "directed and praised that work."

In 2002, Skilling said in a letter to the editor published in the Chronicle, "I did not and do not expect to be indicted. I committed no crime while I was at Enron and no one told me they were committing a crime."

Skilling, unlike Lay, Fastow and others, did not invoke his Fifth Amendment rights when questioned by Congress in early 2002. He also appeared on some national talk shows when the scandal broke and denied that a conspiracy to defraud investors had existed. He attributed Enron's demise to a "run on the bank" after Fastow's self-dealing was made public.

"On the day I left, on Aug. 14 (2001), I believed the company was in strong financial condition," Skilling told the oversight committee of the House Energy and Commerce Committee in February 2002. "I wasn't there when it came unstuck."

But various indictments that have been handed up against other former Enron executives have alleged financial and accounting manipulations began in the mid-1990s, when Fastow was in finance but before he was named CFO in 1998.

Skilling was a consultant at McKinsey & Co. before he joined Enron in 1990. Fastow was one of his first hires that year. He became chief operating officer in 1997, then ascended to CEO in February 2001.