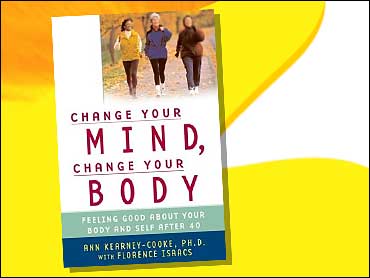 Women in midlife face many changes -- the kids are grown and many women are either retiring or returning to the workplace after years at home.

And, then, of course, there are the physical changes such as menopause, sagging skin and crow's feet. Such changes can spark anxiety over the aging process. Dr. Ann Kearney-Cooke, director of the Cincinnati Psychotherapy Institute and an adjunct professor of psychology at the University of Cincinnati and Miami University of Ohio, visits The Early Show to discuss why women are insecure about aging and to examine the six areas where women they can adjust their attitudes and learn to feel good about themselves.

So what is it, exactly, that makes so many women unhappy about entering mid-life? Kearney-Cook says, "First, there are the physiological changes- there's menopause or perimenopause. And, then there are the psychological factors - for women who've had children, the kids are grown and leaving the nest, or older women who've delayed having children are questioning that decision and having anxiety around those issues. And, then your parents are older and sometimes you're starting to take care of them."

This can be extremely overwhelming, says Kearney-Cook, partly because of the role reversal. Suddenly, middle-aged women are taking care of their parents and their parents' physical needs, when in the past, the parents took care of them.

There is also the tendency to think, 'Wait a minute! I'm half way through life - is that all there is?' Employment insecurity begins to be an issue. "There is," Kearney-Cook says, "fear among mid-lifers about jobs and careers. It used to be if you worked for Proctor and Gamble, you'd have a job for life. Now, there's downsizing and you don't have the job security you once did."

Romantic relationships also oftentimes begin to come into question. Kearney-Cook "hear[s] a lot of women say that there were so busy raising the kids that it didn't matter that their husbands didn't meet their needs. But now, they aren't happy. It's a time when some marriages don't survive."

In additon to the emotional upheaval that comes with middle age, there are, of course, the physical changes. Members of the baby-boomer generation, to which Kearney-Cook belongs herself, often say "I'm 55 but I feel like I'm 30." For those women who are still mentally young, says Kearney-Cook, there is a sense that their bodies have betrayed them.

Still, Kearney-Cook stresses that aging isn't all bad. When asked if she considers there to be a positive component to aging, she responds, "Absolutely."

"Usually, you've lived life and have 40 or 50 years under your belt - you have some experience and wisdom. Women are conditioned to pay attention to what others need and suddenly they can start paying attention to their needs.

Women are starting to 'let it rip' a little.' They are saying, 'I'm a big girl now and I'm going to talk about what I want. And do what I want.' You see individuals who are freed up to be more authentic and to speak their minds. It's a time when people can be very creative. They have more time to think about things. And, I think they can use their wisdom to renegotiate relationships and make them healthier."

Middle age can be an extremely rewarding period in a woman's life, says Kearney-Cook, because it's time to be "different." Women in their 20s or other stages of young adulthood are expected to spend time building careers and starting families.

A lot of times, these expected milestones are not a woman's first choice. In middle age, she can redefine her mission by developing some physical, mental and/or spiritual energy and refocus. Middle-aged woman can set new goals that align with their life experience and values. They can be courageous and try new things.

But what if you've always had trouble accepting yourself for who you are - can you learn to change as you get older? According to Kearney-Cook, "Sometimes we have an outdated version of ourselves. We continue to think of ourselves as we were. If you say, 'I can't ride a bike' that might have been true when you were 25, but you have had other life experiences now and you might be able to ride one now."

Kearney-Cook has six suggestions for making us happier as we age: