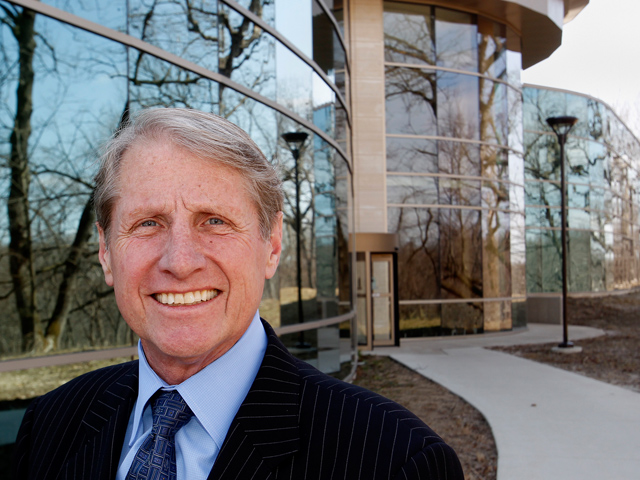 (CBS/AP) IOWA CITY, Iowa - Peregrine Financial Group CEO Russ Wasendorf Sr. pleaded guilty Monday to carrying out a 20-year fraud that duped investors and transformed his image from a highly-regarded businessman to one of Iowa's most notorious corporate criminals.

During a court hearing in Cedar Rapids, Wasendorf admitted to the $200 million fraud that he first confessed in a note found on him after an unsuccessful suicide attempt in July. The 64-year-old pleaded guilty to charges of mail fraud, embezzling customer funds and making false statements to two regulatory agencies.

Wearing an orange jail-issued jumpsuit, Wasendorf repeatedly answered "yes, your honor" as he admitted guilt to each element of the four felony counts.

"Yes, your honor," replied Wasendorf, who later repeated "guilty" four times when asked how he pleaded to the charges.

Prosecutors said Wasendorf likely will face a recommended minimum sentence of at least 24 years in prison at his sentencing hearing, which was not immediately scheduled.

U.S. District Judge Linda Reade ruled Monday that Wasendorf would remain in the Linn County jail while she considers the prosecution's claim that he poses a risk of fleeing abroad or committing suicide before sentencing. A magistrate ruled last week that Wasendorf could be released after Monday's plea hearing to live in suburban Cedar Rapids with his pastor before sentencing, but prosecutors appealed.

The guilty plea marks the latest step in the stunning downfall of a businessman and philanthropist who was well-known in financial circles and a major player in Cedar Falls. It comes as a receiver is dismantling the business empire and image that Wasendorf built over decades to pay back the 24,000 customers who are missing money.

The receiver has already gotten rid of Wasendorf's corporate jet, and is trying to sell the company that published Wasendorf's books and magazines on investing. Wasendorf's family charity, known for donations to universities and hospitals, has been frozen. The receiver is also moving to sell Wasendorf's homes, his 4,000-bottle wine collection, the upscale restaurant he owned in Cedar Falls, and the $20 million company headquarters that stood as a symbol of Wasendorf's home-grown success with a firm he started in an Iowa basement 30 years ago.

"He has gone from being a hero in his community to a villain," prosecutors wrote in court documents Monday, calling Wasendorf "the perpetrator of one of the most lengthy and egregious frauds in the history of this district."

Wasendorf was arrested in July, days after he was found unconscious in his car in the company's parking lot with a tube hooked up to the exhaust pipe. The suicide attempt came hours after he learned that his company, which marketed itself as PFGBest, would be forced to allow regulators to have electronic access to its bank accounts. That meant he would no longer be able to hide his fraud, and regulators would learn more than $200 million in customer funds was missing.

In his plea agreement, Wasendorf acknowledged that he secretly withdrew customer funds starting in the 1990s and used computers to make phony bank statements to conceal the theft. He gave fraudulent statements to his accounting department showing fictitious deposits and balances. The false numbers were used to generate monthly reports to regulators showing the company was holding more than $200 million in customer funds than it actually had.

Wasendorf fooled auditors with the National Futures Association, the industry's self-regulator, by changing the bank's address in the statements to a post office box he controlled. The auditors would mail forms asking the bank to verify Pergrine's account balances; Wasendorf would send back false documents purporting to be from the bank.

Wasendorf admitted that he used the money to prop up his struggling firm's finances and pay for its headquarters. He also acknowledged using customer money for a range of personal and other business interests, including a Romania real estate firm and the top-notch Italian restaurant in Cedar Falls called myVerona.

Customers of Peregrine, mostly investors in commodities ranging from corn to gold, have been unable to access their money since the firm's collapse in July. An initial payment is expected to be released in coming weeks that will give customers 30 to 40 percent of the money they had in their accounts. Additional payments are expected but the bankruptcy trustee has warned they will fall short of making customers whole.