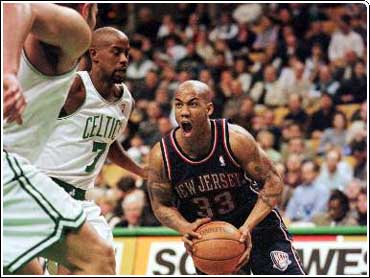 When Boston Celtics coach Rick Pitino sent the second string into the game on Friday night, he wasn't giving it up - he was turning it up.

The Celtics' "press unit" cut a 17-point deficit to six, then the starters came back in to finish off New Jersey 100-95 and send the Nets to their sixth consecutive loss.

"I'm glad our bench really turned it around. I take my hat off to them," said starter Paul Pierce, who had 19 points, including two free throws with 3.8 seconds to clinch it. "I thought coach was going to let them play the whole fourth quarter."

Tony Battie came off the bench to score all 14 of his points in the second half and all five of his rebounds in the fourth quarter. Kenny Anderson made a short jumper to give Boston the lead, then added two free throws for insurance with 17.1 seconds to play.

"Our first unit just thought, 'These guys got us back in the game and we better not screw it up,"' said Pitino, whose team improved to 17-7 at home and snapped a two-game losing streak.

Stephon Marbury had 20 points and 11 assists and Keith Van Horn had 10 points with 11 rebounds for the Nets, but the two combined for 9-for-26 shooting.

"This team works hard, but it is so fragile it just splinters," New Jersey coach Don Casey said. "We have to get the pieces back."

New Jersey led 74-57 with 3:24 left in the third quarter when the Celtics put Dana Barros, Walter McCarty and Doug Overton on the floor to join Battie and Adrian Griffin. The full-court pressure helped whittle the lead to six points, 82-76, with 9:55 left.

Pitino put most of the starters back in with 8:07 left. It was 86-80 when Pierce made one free throw and Barros, who had missed his three previous 3-point attempts, hit one to cut the Nets' lead to 86-84.

"Dana never misses four in a row. Not with good looks like that," Celtics forward Antoine Walker said. "I'd bet money on that."

Walker set Battie up for a dunk to tie it 86-all with 4:50 left. Kendall Gill beat the 24-second clock to give the Nets an 88-86 lead and, after Pierce hit his first free throw, Battie slammed down the rebound on the second to make it 89-88 Boston.

"Battie was huge for them in the fourth quarter," Van Horn said. "Their second unit beat us with pure energy."

The teams traded baskets until Scottie Burrell's 3-pointer gave the Nets a 95-94 lead. But Anderson pulled up at the side of the lane to sink the game-winner with 48 seconds left.