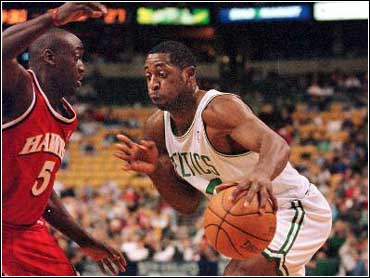 The Boston Celtics were due for a close win of their own.

Antoine Walker scored 26 of his 34 points in the second half, including a tiebreaking 3-pointer with 25 seconds left during a game-ending 11-0 Boston rally, as the Celtics beat the Atlanta Hawks 99-94 on Monday night.

The win snapped Boston's 10 game-losing skid, its longest since 1997. Since the its last victory, March 18 against Dallas, Boston had dropped seven games by six points or less, including a pair at home on buzzer-beating shots by Minnesota and Washington.

"Hopefully our luck is about to change but unfortunately it's too late," Walker said. Only four Eastern Conference teams have worse records than Boston, long eliminated from the playoff race.

Kenny Anderson was the only other Boston player in double figures, with 24 points.

"They all even up," Anderson said with a smile. "But we need about seven of these."

Jim Jackson paced the Hawks, losers of seven in a row, with 27 points and 10 rebounds. Atlanta hasn't won on the road since Feb. 25 at Seattle, a 12-game drought.

"We'd like to win a game on the road, at home, any win," Jackson said.

The Hawks turned the ball over six times in the closing 2 1/2 minutes.

"Another `L'," Atlanta guard Jason Terry said. "We thought we had it."

Paul Pierce's three-point play cut it to 94-91 before Anderson's twisting layup sliced it to one with 1:47 left.

Atlanta had opened its biggest lead of the game, 52-44, on LaPhonso Ellis' basket 55 seconds into the third quarter. Walker then broke free for 20 of his points during a 28-16 run that gave Boston a 72-68 advantage after three.

"A good win for us," Boston coach Rick Pitino said. "Obviously both teams needed a win to cheer up."