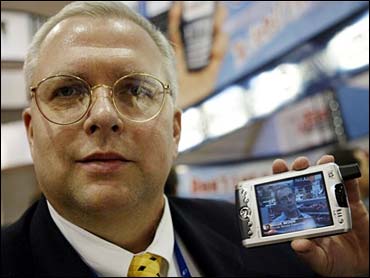 The screens may be tiny and the batteries overworked, but the wireless industry is bringing TV to a cell phone near you.

With the mammoth International Consumer Electronics Show in Las Vegas as a backdrop, Verizon Wireless planned Friday to detail a robust new service for mobile phones, one that promises better-quality audio and video — albeit custom-designed for the numerous constraints of a handheld device.

Verizon also plans to announce a major increase in the number of markets where its high-speed wireless technology will be available, as well as wider coverage in the 20 markets where it was introduced last year, according to a company source who spoke on condition of anonymity.

The new Verizon offering, along with other multimedia wireless services unveiled at CES in Las Vegas, marks a big step in the industry's push to generate revenue from more than just phone calls.

On Thursday, SmartVideo Technologies Inc. announced deals to deliver live and prerecorded TV programs to cell phones equipped with Microsoft Corp.'s Windows Mobile operating system. The service, priced from $13 to $18 a month, is accessed through a Microsoft Web site featuring other forms of content customized for mobile devices.

Consumers have already shown an appetite for mobile e-mail, Web browsing, music and video games, but many experts view the public fascination with TV and movies as an especially potent lure for premium wireless services.

"Video is leaps and bounds above anything else" in terms of importance to users, said Roger Entner, an industry analyst for The Yankee Group. "This can certainly bring people in, because it's really eye candy."

But while cellular TV has been available for several years in South Korea, wireless providers in Europe and North America are only now upgrading their networks with technology powerful enough to transmit video that doesn't look more like a slide show.

Sprint Corp., for example, has led the charge in this country with two pay-TV services using a technological predecessor to EV-DO, the next-generation platform that Verizon Wireless has already deployed on a broad scale and that Sprint is only now beginning to roll out. While the audio comes in clear, the Sprint video barely resembles a moving picture and breaks up repeatedly.

"With EV-DO, basically all the promises we have had for so long about (next-generation) wireless data can come true," Entner said. "With EV-DO you can have full-fledged TV on a handset," he said, noting that the speedier networks also make downloads of music and video games far less tedious.

But even with more bandwidth, it's not so easy to replicate the big screen experience on a device with limited screen size, audio quality, processing power, storage capacity, and battery life — the last of which tends to suffer with improvements to any of the other factors.

Further, it's not very clear how long users will want to stare at such a small screen, or whether they'll be in a position to watch anything longer than a few minutes while roaming about.

That's why Verizon and others are trying not to inflate expectations for the new medium, stressing that most users will only want to watch short bursts of video. Wireless providers have been asking media companies to produce specialized video clips — brief news reports and "mobisodes," or episodes of real TV programs that run as little as a minute.

Vodfone Group PLC, part owner of Verizon Wireless with Verizon Communications Inc., forged such a deal in November as it launched its own next-generation wireless service across Europe. The deal with News Corp.'s Twentieth Century Fox studio calls for a series of one-minute dramas based on its hit TV show "24."

Nonetheless, innovations with display technologies could make full-length programs and movies more appealing in the future. For instance, thin-film displays stashed inside the device might be unfurled for viewing. Or special eyeglasses might project the image directly in front of the eyes.

"People don't listen to a silver-dollar-sized speaker on the iPod. We put in high-quality headphones and get totally immersed in the music," said Phil Leigh, president of Inside Digital Media, a research firm in Tampa, Fla.

He said video needs an analogous development with eyeglass screens — something that has proven technologically, but not economically feasible for consumers.

Qualcomm also is investing $800 million to launch a national cellular TV service in 2006 over its own spectrum, broadcasting up to 20 channels for wireless carriers to sell their customers.