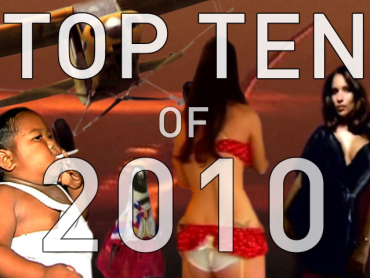 LOS ANGELES (CBS) As a video blogger, or "digital reporter" as I like to say here at CBSNews.com, I thought it was fitting to put together a list of the Top 10 of 2010, the top 10 most watched videos on all of CBSNews.com. 10) Dude Perfect's basketball shot out of an airplane as seen on "The Early Show"

9) People in across the country took part in a "pants-less commute." Hundreds of commuters dropped their drawers while riding public transportation in homage to a stunt created by the New York City based "Improv Everywhere."

8) City council members in Bellevue, Wash., were outraged over roadside coffee stands popping up all over town. The draw for customers was not just a delicious cup of java but the work attire, which had female employees dressed down to their bikinis. 7) Speaking of inappropriate behavior, No. 7 goes to a lawsuit against Citibank placed by employee Debrahlee Lorenzana, who claimed the bank fired her for being too sexy. 6) Skyrocketing into No. 6 is footage of what appeared to be a missile launching off the west coast. It was later confirmed by the Pentagon on "CBS Evening News" to simply be an airplane taking off for Hawaii. 5) 2010 was off to a rocky start when a devastating 7.0 magnitude earthquake struck the Haitian capital of Port-au-Prince. CBS News featured full coverage of the disaster, but the most watched video was exclusive footage acquired by the Investigative Unit catching the earthquake the moment it occurred. 4) Another CBS News exclusive holds the No. 4 spot with the story that uncovered the truth behind Internet phenom, The Smoking Baby. 3) With more than 1.3 million views is a video from a South Korean zoo that rang in the Year of the Tiger, featuring baby tigers being taught how to make art with their paws and penguins on a stroll dressed up in traditional Korean garments. Not sure if this is cute or creepy. 2) It was a strong year for CBSNews.com's original live video content with more than 1.4 million people tuning into a number of the informative, interactive, interesting and often entertaining shows and webcasts including @KatieCouric, Washington Unplugged, Backstage Live, breaking news events like BP's oil spill cam and the rescue of the Chilean miners, as well as a number of special reports throughout the year including the State of the Union address and extended election night coverage. 1) Finally, the No. 1 spot with more than 2.5 million views is held by Chief Investigative Correspondent Armen Keteyian's report on the potential hidden security risk office copy machines hold.

There you go! Keep on clicking and watching and have a great holiday!