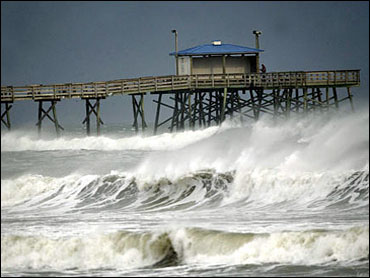 As Hurricane Ophelia churned off the Carolina coast, Steve King grudgingly agreed to miss watching football on television to go down to the marina and move his sea kayak out of harm's way.

As he and his brother-in-law hoisted the kayak onto his Jeep, King said the devastation wrought by Hurricane Katrina was on his mind, though it was too early to panic about this new storm.

Although this one doesn't appear to be packing much of a punch, at this point no one is taking anything lightly,

"They keep saying this storm is two or three days out," he said. "I think we're all waiting for something to happen."

Ophelia was more than 200 miles from land with sustained wind of 75 mph early Monday, but it was piling up heavy surf that pounded the beaches. A tropical storm warning was issued Sunday evening from Cape Lookout south to Edisto Beach, S.C., and a hurricane watch remained in effect for the same area.

At Wrightsville Beach, lifeguards ordered swimmers out of the surf.

"They are saying they don't want anyone to even touch the water," said Kathy Carroll, 37, of Wilmington. "Now I know how a flounder feels. I was getting tossed all over the place."

Despite the warnings, there were no long lines at Roberts Grocery in Wrightsville Beach, where customers were buying chips and beer — not bottled water and batteries.

"Usually they are buying all the bread and milk," said store manager Teresa Hines. "Some of the regulars have told me they have their hammers and nails ready just in case."

While most folks aren't bothering to board up or hunker down, Bowers reports, but Micky and Robin Williams aren't taking any chances. To them, a hurricane is a hurricane.

"We've been through quite a few. We're very aware and cautious with hurricanes," Micky Williams said.

With a history of several destructive storms, New Hanover County has a well-rehearsed disaster plan. But Katrina, which had been a powerful Category 4 hurricane before it made landfall in Louisiana and Mississippi, was on residents' minds even though Ophelia was only Category 1 and had been waxing and waning in strength.

"If it was a Category 4 barreling down here, I would get out if I had a chance," Lee said. "The structures just can't take that kind of wind. We're cautiously watching (Ophelia). We're not giving up until it's north of us."

By 5 a.m. EDT, Ophelia was centered 220 miles east-southeast of Charleston, S.C., and 280 miles south of Cape Hatteras, the National Hurricane Center said. The storm was moving toward the west near 3 mph, and a gradual turn toward the northwest was expected Monday, forecasters said.

The storm has followed a wandering course since it became a tropical storm Wednesday off the coast of Florida.