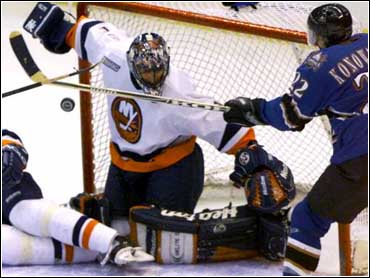 It was only fitting that Adam Oates got his 300th career goal while trying to set up one of his teammates.

Oates scored the game-winner with only 5:01 left Monday night to give the Washington Capitals a 3-2 victory over the New York Islanders.

"It feels good," Oates said. "300 is a cool number, especially since I'm a passer. And it was kind of cool that I was passing when it goes in."

Oates won the game during a four-on-four as he was trying to get the puck to Steve Konowalchuk. His pass went off defenseman Aris Brimanis' skate and past Roberto Luongo.

"The way I interpreted the play was that (Oates) was going to pass," Brimanis said. "It's simple geometry - it hit my skate and went in. I was just concerned about tying my man up in front, and I think I did that. I have to tie up my skates next."

The win moved the Capitals within two points of Southeast Division-leading Florida.

Washington coach Ron Wilson cited Oates as a key factor in the team's resurgence. The Capitals are 21-5-5 since the Christmas break.

"He's there taking every defensive faceoff, and he's still very creative offensively," Wilson said. "He's played for 17 years, and I don't think he worries when he comes close to a personal milestone."

New York took a 1-0 lead on Brimanis' first NHL goal at 1:46 of the second period during a power play. Brimanis wristed a 35-footer from the left side that sailed in.

The Islanders managed only 18 shots against goalie Olaf Kolzig.

Dahlen put the Capitals ahead at 11:53 on a one-timer from the low slot past Luongo, who played well in stopping 34 shots.

"That line was the key for us tonight," Wilson said. "Halpie, Kono and Ulfie were creating some chances for us."

The Islanders took only two shots after Brimanis' goal, but the second one tied the game. Olli Jokinen finished a rush by slapping a shot from the right circle that hit off Kolzig's outstretched right pad and went into the top of the net at 17:58.

Washington finished the game down three players. Defenseman Alexei Tezikov took a slap shot off his inner elbow and his arm went numb. Fellow defenseman Sergei Gonchar went head first into the boards after being cross-checked. Forward Terry Yake sustained a cut on his stomach that required six stitches.

Yake was injured when a six-inch sliver of Mew York defenseman Zdeno Chara's stick punctured his abdomen while being hooked.

While New York is on a four-game losing streak, the Capitals have their sights set on the Panthers.

"Florida had been hot for so long, it wasn't worth scoreboard watching before," Oates said. "It is now."