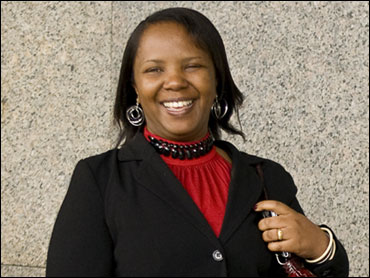 A Rwandan man was found guilty Friday of war crimes during his country's 1994 genocide, becoming the first person convicted under a new Canadian law that allows residents to be tried for crimes committed abroad.

Desire Munyaneza, 42, faces a possible life sentence. He was found guilty of all seven charges against him that include genocide, crimes against humanity and war crimes for his alleged role in the rape and slaughter of at least 500,000 Tutsis and moderate Hutus in Rwanda.

"The educated son of an important bourgeois family in Butare, Desire Munyaneza was at the forefront of the genocidal movement," Quebec Superior Court Justice Andre Denis said in his landmark ruling that followed some six months of deliberations.

The judge found that Munyaneza sought to destroy the Tutsi ethnic group in Butare and the surrounding area.

"To that end, he intentionally killed Tutsi, seriously wounded others, caused them serious physical and mental harm, sexually assaulted many Tutsi women and generally treated Tutsi inhumanely and degradingly." Denis noted in his written decision.

The judge also said Munyaneza was among a group of assailants who killed hundreds of Tutsi refugees at a church.

Munyaneza, a Hutu, is the first defendant to be tried under the 7-year-old War Crimes Act.

"I'm very happy he was found guilty. I want to thank and congratulate Canada," Caesar Gashabeze, a genocide survivor, said outside court. "We have been waiting for this."

Munyaneza was living in Toronto when he was arrested in October 2005 after reports that he had been seen circulating among Canada's Rwandan community. At the time, African Rights, a Rwandan group that has documented the genocide, linked Munyaneza to key figures indicted by the U.N. International Criminal Tribunal for Rwanda.

During his trial, more than 66 witnesses testified in Montreal, and in depositions in Rwanda, France and Kenya, often behind closed doors to protect their identities. Many accused Munyaneza, who was 27 at the time, of being a ground-level leader in a militia group that raped and murdered dozens.

Munyaneza's defense centered on claims that many of the witnesses' testimony was faulty and that many were unable to identify his prominent facial scar.

Defense lawyer Richard Perras said he would appeal. "The evidence did not justify a conviction," he said.

Canada denied Munyaneza refugee status in September 2000 and he has since lost several appeals. Canada's Immigration and Refugee Board also found there were reasons to believe he had participated in crimes against humanity.

Bruce Broomhall, an international criminal law professor at the University of Quebec at Montreal, said before the verdict that the case would add weight to the argument that Canada does not allow war criminals to reside in Canada.

A sentencing hearing was scheduled Sept. 9.