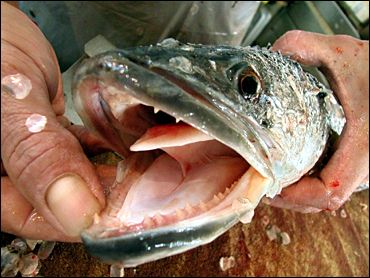 An avid angler, Cliff Magnus spends almost every day on the Potomac River system. Last month, Magnus came face to face with a Potomac predator, what locals call "a frankenfish."

"When the fish hit, it was a really good fight," he tells CBS News Correspondent Thalia Assuras. "It's got one big fin that wraps all the way around the back, mouth full of teeth and very, very slimy."

And very voracious. Magnus had caught a northern snakehead, an Asian species that devours insects, crustaceans and so much other underwater life that it threatens to starve the region's native fish.

Magnus says, "Anything that you can pull a hook out of, give it a wack in the head, throw it in the live well with no water, and four hours later it's still alive that's, that's not right."

Frankenfish, indeed. The snakehead can breathe out of water and travel short distances on land, potentially infiltrating other river systems, a menacing monster that could change the ecosystem of the Northeast.

Steve Early of the Maryland Department of Natural Resources says, "The fish don't belong here. They compete with things that are here that do belong here. And we don't know what they're bringing in with them."

No one knows where the snakeheads came from, whether they were bought alive in fish markets for food or kept in aquariums and then released into the Potomac system. Whatever the case, the big worry now is that they're breeding.

Wildlife officials hope that's not happening and are out looking for snakeheads before the monsters multiply.

"My bottom line is eradication," Early says. "I want them all out of the river."

Using boats that zap an electric current to paralyze river creatures so they rise to the surface, the Maryland Fisheries Service is determined to find where the snakeheads lurk. They have used poison, and in some cases drained ponds, to get rid of them.

Early says, "The threat with all invasive species is that they will compete very effectively and that they can dominate a system."

And that's why there's now a Potomac neighborhood watch system of sorts. State authorities are turning to anglers to catch the underwater bad guys, asking anyone who hooks one to turn the fish in, dead or alive, but preferably dead. There's even a reward from Bass Pros Shop in Maryland.

Owner Allan Ellis says, "It's not 'Jaws' thank goodness, but it's a top-of-the-food-chain predator."

Magnus was the first to reap the bounty. What he'd rather have, he said, is every snakehead out of his river.