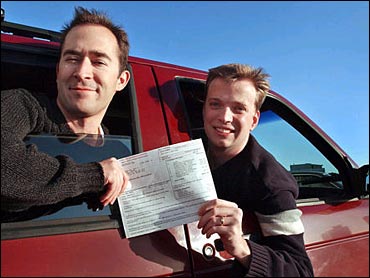 Lockyer, a leading Democrat and potential rival to Schwarzenegger in the 2006 election, agreed immediate action was necessary because of the statewide concern over the issue.

"The people of California who have enacted laws that recognize marriage only between a man and a woman, and the same-sex couples who were provided marriage licenses in San Francisco deserve a speedy resolution to the question of the legality of these licenses," Lockyer said.

Lockyer at the same time took pains to put a little distance between his own position and that already taken by Schwarzenegger.

"The attorney general is independently elected. My client is 35 million Californians, not just the Terminator," said Lockyer.

More than 3,000 same-sex couples have been married since San Francisco Mayor Gavin Newsom decided to give out the licenses Feb. 12.

"The process has gone extraordinarily well," Newsom said Monday, as weddings continued at City Hall, "when you consider that literally thousands and thousands of people are coming, converging on city hall from around the world."

The Campaign for California Families has argued that the weddings harmed the 61 percent of California voters who in 2000 supported Proposition 22, a ballot initiative that said the state would only recognize marriage between a man and a woman as valid.

Newsom, a Democrat, maintains that he is following the state constitution.

"Mayor Newsom is upholding the state constitution, which explicitly outlaws discrimination of any kind," spokesman Peter Ragone said. "We believe the city's actions are both lawful and a recognition of the love that many couples share."

"The bottom line," argued Ragone, "is the legal process is working and those who would suggest otherwise do so only for political gain. We believe we are upholding the constitution. Others may disagree. We look forward to the court's ruling."

"We have to stay within the law," he said. "There's a state law that says specific things, and if you want to challenge those laws then you can go to the court."

Ragone disputed the governor's characterization of the scene at City Hall, where the weddings have been held.

Even though Lockyer said Schwarzenegger doesn't have the authority to order him to act, he followed the governor's wishes anyway. He said there is no deadline for the Supreme Court to decide whether to accept the case or make a ruling.

Also Monday, a lawsuit was filed on behalf of two homosexual couples seeking to wed who were denied marriage licenses in Beverly Hills. The couples hope to challenge the state's ban on same-sex marriages.

Attorney Gloria Allred, who filed the suit in Los Angeles Superior Court, also helped the couples attempt to get their licenses.

The Rev. Troy Perry, a member of the Los Angeles Human Rights Commission, and his partner Phillip DeBliek were legally married in Canada last year.

The two sought a marriage license at the Beverly Hills City Hall on February 12, and were instead given a one-page flier detailing the state's stance barring gay marriage.

"In most ways, Philip and I are like any other couple in this state," Perry said Monday. "We work our jobs, we pay our taxes. We have demonstrated our commitment and our love for each other over almost two decades. Yet, the current laws of the state of California treat my same-sex partner and me as second-class citizens."