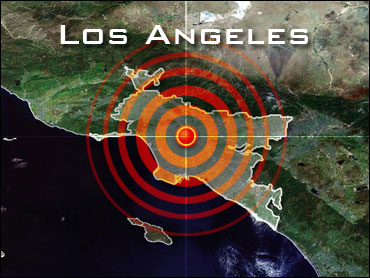 An earthquake swarm near a section of the notorious San Andreas Fault that has not ruptured in more than 300 years has prompted some people 150 miles away to take action.

When Diane Scheerhorn read an e-mail from the state about the small possibility of a San Andreas temblor, she wasted no time in directing all nine elementary schools in the small district she leads to check their emergency supplies.

After weighing the pros and cons, Scheerhorn went a step further. She postponed all nighttime activities this week.

"We felt we needed to err on the side of safety," Scheerhorn, superintendent of the Centralia School District in Orange County, said Thursday. "I honestly believe our parents would want us to as well."

A swarm of more than 250 earthquakes have hit close to the southern San Andreas Fault since Saturday, ranging in magnitude from 0.8 to 4.8. The swarm is centered near the thinly populated Salton Sea region in the state's southeastern desert, but shaking can be felt in the fast-growing Coachella Valley to the northwest.

Scientists have been keeping close tabs on the swarm because it is rattling near a section of the San Andreas that last snapped in 1690. The San Andreas has the potential to unleash a "Big One" and cause serious damage to the greater Los Angeles region.

The seismic jiggling frayed the nerves of some people who wonder if the swarm is just a warm-up to a major quake. Since scientists cannot predict earthquakes the way meteorologists can forecast tomorrow's weather, the best they can say is that the latest rumblings slightly raise the probability of a San Andreas event, but the risk significantly drops off with time.

The shaking "hasn't completely died off, but it's backed off a lot," since the strongest quake in the swarm hit, geophysicist said Ken Hudnut of the U.S. Geological Survey.

Scheerhorn, the school superintendent, decided to take precautions after learning from her school safety officer that the California Emergency Management Agency e-mailed local emergency responders to alert them about the distant quake swarm.

Scheerhorn said she did not want to take the chance that something would happen during off-hours when school crisis teams trained to deal with disasters were not around. She canceled Wednesday's parenting class and Thursday's open house, where parents were supposed to meet with teachers to talk about their children's progress.

A spokeswoman with the state Emergency Management Agency said the e-mail was targeted at local emergency managers to remind people about the importance of being prepared for an earthquake and was not a "call to action."

"While there was some response that we did not anticipate from this communication, whatever the locals feel they need to do to protect lives and property, it's our job to support them," said agency spokeswoman Tina Walker.

Susan Hough, scientist-in-charge of the USGS Pasadena office, said people should not overreact to the quake swarm, but instead take the opportunity to make sure they have a disaster kit ready.

The Salton Sea area is prone to earthquake swarms, which are usually associated with the movement of hot magma or underground heated water. The state's largest lake sits on top of a piece of the Earth's crust that is being ripped apart by tectonic forces. Fluid from the interior gets heated up and rises through an opening that can cause swarms, Hudnut said.

Typical earthquakes start out with a main shock followed by smaller aftershocks. In a swarm, clusters of earthquakes - sometimes hundreds or thousands of them - hit close together in time and do not have an obvious main shock.

Earthquake swarms frequently begin without explanation, continue for days, weeks, months or even longer and taper off without any major event.

The last time the Salton Sea was rattled by a series of quakes was in 2001. The latest swarm initially hit within a mile of the southern San Andreas, but has since moved south away from the fault.

"That's probably a good thing, but we really don't understand it thoroughly enough to say for sure," said seismologist Kate Hutton of the California Institute of Technology. "If it was moving north toward the San Andreas, it might make us a little more nervous."