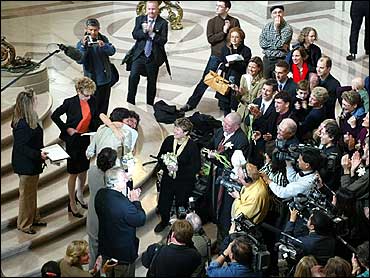 Gay and lesbian couples won another reprieve Friday when a judge declined to immediately stop San Francisco from granting them marriage licenses, saying conservative groups failed to prove the weddings would cause irreparable harm.

Judge Ronald Evans Quidachay denied the Campaign for California Families' request for a temporary restraining order but said the group did have the right to a hearing on their argument that the city is violating state law.

The conservative group argued that the weddings harm all Californians who voted in 2000 for Proposition 22, which defined marriage as between a man and a woman.

The judge suggested that the rights of the gay and lesbian couples appeared to be more substantial.

Quidachay consolidated the Campaign for California Families' lawsuit against the city with one filed by another conservative group, and told lawyers for both sides to work out between themselves when the next hearing would be held.

But as CBS News Correspondent Vince Gonzales reports, arguments that might win over a California court may not work in the rest of the country -- where polls show a majority favor banning gay marriage.

"What's happening here in San Francisco will indeed awake the sleeping giant of the majority of Americans who believe marriage is one man and one woman," said Matthew Staver, president of the conservative Liberty Counsel.

Meanwhile, a county clerk in Bernalillo, New Mexico issued marriage licenses Friday to at least 15 gay couples, some of whom then exchanged vows outside the courthouse, and dozens more same-sex couples lined up for a chance to tie the knot.

Dunlap said she made the decision after county attorney David Mathews said New Mexico law is unclear: New Mexico law defines marriage as a contract between contracting parties but does not mention gender.

"This has nothing to do with politics or morals," she said. "If there are no legal grounds that say this should be prohibited, I can't withhold it. This office won't say no until shown it's not permissible."

"When we heard the news this morning, we knew we couldn't wait. We had to come down here," said Jenifer Albright of Albuquerque, who exchanged vows with partner Anne Shultz.

Late Friday, the courthouse quit issuing the licenses. The N.M. state attorney general issued an "advisory" opinion, saying the licenses were invalid. The county then halted the process. A crowd outside the office reacted with boos and shouts.

In Washington, CBS News Correspondent Bill Plante reports that although President Bush has already said he believes marriage should be between a man and a woman only, many conservatives are frustrated that he is not more vocal on the subject.

White House political strategist Karl Rove has flat-out promised conservatives that the President will endorse a constitutional amendment -- even though Mr. Bush himself has so far only hinted at it.

Plante reports it's likely Mr. Bush is saving his ammunition for the presidential campaign later this year.

The feeling has been that the President will get more bang for the buck by waiting until the democrats are off the front page and his own campaign is in high gear, says Plante.