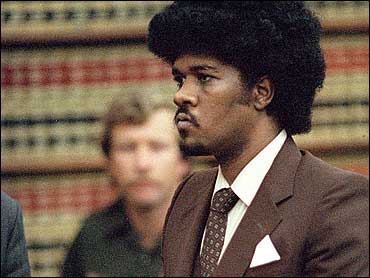 A condemned murderer whose bid for clemency was denied by Gov. Arnold Schwarzenegger won a stay of execution on Monday, hours before he was to be executed.

The 9th U.S. Circuit Court of Appeals granted a request for an 11-judge panel to rehear the case of Kevin Cooper. His execution would have been the first in California in two years, and is the first death penalty case for Schwarzenegger.

Cooper, who was convicted in the 1983 hacking deaths of four people, was scheduled to be executed at 12:01 a.m. Tuesday at San Quentin Prison after spending 19 years on death row.

It was not clear when the panel would hear the latest challenge, which Cooper's attorneys filed Sunday.

Cooper has gained support from actors who oppose the death penalty, including Washington, Sean Penn and Mike Farrell, and from civil rights leader Jesse Jackson and boxer Rubin "Hurricane" Carter. In addition, three of the jurors who convicted Cooper called for a stay of execution so hair and blood evidence can be tested.

On Sunday, two of Cooper's legal claims were turned aside by the 9th U.S. Circuit Court of Appeals. Later in the day, his attorneys filed an appeal with the U.S. Supreme Court seeking to block the execution. Schwarzenegger already has declined to halt the death sentence.

The last execution in California was that of Stephen Anderson in 2002, when Schwarzenegger's predecessor, Gray Davis, refused to grant clemency.

The last California governor to grant clemency to a condemned murderer was Ronald Reagan, who in 1967 spared the life of a severely brain-damaged killer.

Cooper claims DNA evidence found at the scene, which matches his, was planted by authorities. He has repeatedly asked for renewed tests, but the courts have balked, saying there is no evidence of tampering and there is overwhelming evidence of Cooper's guilt.

Cooper maintains a trio of murderers committed the savage attacks, according to his attorney, David Alexander.

Cooper's attorneys also insisted they have new evidence in the case, producing a woman who said that on the night of the 1983 murders, she saw two men covered in blood at a bar near the scene of the killings.

About 100 death penalty opponents gathered Sunday near Schwarzenegger's home in Southern California, and hundreds are planning a candlelight vigil outside the prison gates.

"This could be one of our biggest protests ever," said Lance Lindsay, executive director of Death Penalty Focus, a group that lobbies against the death penalty.

In Schwarzenegger's home region of Graz, Austria, about 50 demonstrators called on the governor to stop the execution, the Austria Press Association reported.

"We condemn Schwarzenegger's actions," said a leaflet handed out by the demonstrators. "One wrong can never be corrected by a second wrong, not even when it's an 'action prescribed by the state.'"

The protesters also called city's Schwarzenegger Stadium to be renamed.

The three jurors who asked for a stay said blond hair found in the hands of one of the victims should be tested. The hair had not undergone DNA testing before the 1985 trial. Prosecutors believe the hair was that of the victim, sheared off as she was being hacked to death.

The mother of one of Cooper's victims, Mary Ann Hughes, dismissed the jurors' request.

"This is nothing new," she said. "It's stuff that has been looked at millions of times. This is just an example of the defense playing on the jurors emotions at the last minute."

Cooper, 46, was sentenced to death for the murders of Douglas and Peggy Ryen, both 41, their 10-year-old daughter, Jessica, and Christopher Hughes, her 11-year-old friend.

The victims were stabbed and hacked repeatedly with a hatchet and buck knife. The Ryens' 8-year-old son, Joshua, had his throat slit, but survived.

Joshua Ryen, now a construction worker, was awakened the night of the murder by screaming and was left unconscious with a slashed throat, two hatchet wounds and two stab wounds, his lawyer, Milt Silverman, told the Los Angeles Times for a story in Monday editions.

Ryen hired Silverman after he and his grandmother expressed doubts that Cooper acted alone, but Silverman said his investigation left the survivor convinced that Cooper was the lone killer.

When the murders were committed, Cooper was on the run after escaping from prison, where he had been serving a four-year sentence for burglary. Authorities speculated his motive was to steal the family's station wagon.