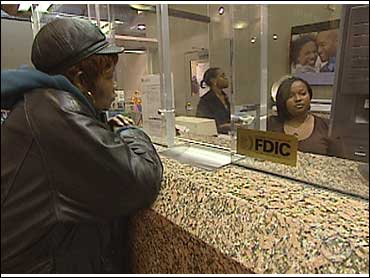 The surprise failure of IndyMac Bank last Friday has many Americans wondering about the health of their own banks, reports CBS News correspondent Priya David.

"The economy has slowed down and it has caused problems for some banks," said Paul Mersky, chief economist for the Independent Community Bankers of America.

But some Wall Street analysts using a little known formula called the "Texas ratio" say as many as 150 financially strapped institutions could fall over the next 18 months.

The Texas ratio is calculated by dividing the institution's bad and delinquent loans by its cash on hand plus money set aside to cover loans that go bad. A ratio of 100 or higher means a bank is in deep financial distress. IndyMac's recent Texas ratio was 116.

Other banks and savings institutions' Texas ratios, once closely held by banking industry insiders, are now leaking to the public.

CBS News has obtained a list compiled just last month of 50 institutions, many with ratios higher than IndyMac's. (See lists below)

Those with the highest Texas ratios are smaller, community banks such as Colorado Federal Savings Bank, with a Texas ratio of 709; Integrity Bancshares in Georgia, with a ratio of 371; Stockgrowers State Bank of Maple Hill, Kan., has a 369; and Mesilla Valley Bank in New Mexico, with a 362.

Stockgrowers State Bank of Maple Hill, Kan., says that its Texas ratio was based on an error in its filing to the FDIC and has since refiled with the correct numbers. Stockgrowers says that it's well capitalized.

"If you are a shareholder, if you are a borrower who wants future loans, then you should be concerned," said Lawrence White of the NYU Stern School of Business.

But for most customers, "there is no alarm out there for consumers with money in community banks," said Mersky.

Mersky points out individual deposits up to $100,000 are federally insured, so if a bank fails, most consumers' accounts are protected.

"Certainly the consumer has a lot to worry about," said Mersky. "But one thing they don't have to worry about is secured deposits in community banks."

But only to a point. That $100,000 guarantee is per person, so for people with more than that amount in any account, it's best to move some of it to a different bank to protect all the assets.

Editor's Note: This story was updated on July 21, 2008, after CBS News received this response from Stockgrowers State Bank of Maple Hill, Kan., regarding their ranking on this list. Calculating Stockgrowers' new data provided to the FDIC, the bank's Texas ratio is 8.2 percent. Stockgrowers State Bank of Ashland, Kan., which is not affiliated with the bank of the same name in Maple Hill, Kan., was never intended to be the subject of this report and should not be identified as one of the institutions which received a high Texas ratio from SNL Financial's list published June 9, 2008. 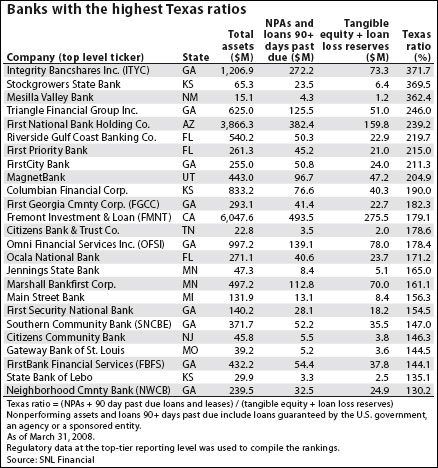 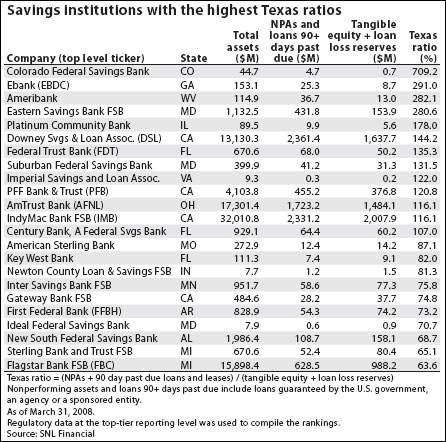