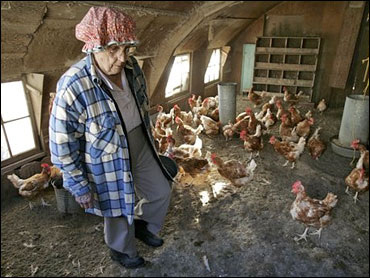 Vaccine improvement is expected to take center stage in the Bush administration's preparations for a worldwide flu outbreak, with a potential travel ban and restrictions on global commerce part of the contingency planning.

President Bush on Tuesday will announce his strategy on how to prepare for the next flu pandemic — preparations expected to cost at least $6.5 billion — whether it is caused by the worrisome Asian bird flu or some other super-strain of influenza.

A key element: States and cities will get their first specific instructions from federal health officials on such things as who should get limited doses of vaccines and the antiviral medications Tamiflu or Relenza.

Topping that list are workers involved in manufacturing flu vaccine, health workers caring for the ill, and other first responders such as police and ambulance drivers, said a public health specialist shown a recent version of the plan.

More details are to be released a day after Bush's speech at the National Institutes of Health. The president first will stress that it will take more than the federal government to battle a super-flu.

"It's akin to the Rosie-the-riveter type thing, because we are asking every American and every American institution to do quite a bit," said White House spokesman Trent Duffy.

"America has this tough-it-out strategy when you get sick. You aren't helping yourself or the country going to work when you get ill. You are potentially threatening a greater health issue if you send children to school when they are sick," Duffy said.

Pandemics strike when the easy-to-mutate influenza virus shifts to a strain that people have never experienced before, something that has happened three times in the last century. While it is impossible to say when the next super-flu will strike, concern is growing that the bird flu strain known as H5N1 could trigger one if it mutates to start spreading easily among people. Since 2003, at least 62 people in Southeast Asia have died from H5N1; most regularly handled poultry.

The nation's strategy starts with attempting to spot an outbreak abroad early and working to contain it before it reaches the United States.

International cooperation "represents a best hope of stopping the lightning spread of a pandemic," Duffy said.

There is a possibility that a pandemic would force restrictions of international travel and commerce, he said.

That's one reason, Duffy said, that "the president recognizes, and we all recognize, that we need to manufacture the vaccine here in America."

Today, most of the world's vaccine against regular winter flu, including much of that used by Americans each flu season, is manufactured in factories in Britain and Europe.

The government already has ordered $162.5 million worth of vaccine to be made and stockpiled against the Asian bird flu, more than half to be made in a U.S. factory.

But the administration plan calls for more than stockpiling shots. It will stress a new method of manufacturing flu vaccines — growing the virus to make them in easy-to-handle cell cultures instead of today's cumbersome process that uses millions of chicken eggs — as well as incentives for new U.S.-based vaccine factories to open.

Such steps will take several years to implement, but the hope is that eventually they could allow production of enough vaccine to go around within six months of a pandemic's start.

"The notion is that prevention beats therapy," said Dr. William Schaffner of Vanderbilt University, an influenza specialist who advises the government on vaccination and has received some information about the plan.

Antiviral drugs like Tamiflu, however, are expected to provide both treatment and some protection against catching a super-flu until vaccines can be distributed. Last-minute discussions included how much Tamiflu to stockpile, with one possibility that the federal government would stockpile enough for 44 million people and tell states to purchase, collectively, another 31 million treatment courses.

Hoping to spur the long-awaited pandemic plan, the Senate last week passed $8 billion in emergency funding for Bush to spend on the preparations.