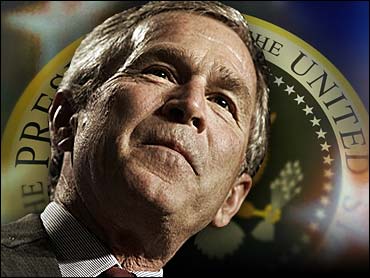 President Bush is marking this Memorial Day weekend with words honoring men and women who have died in the nation's service to provide freedom for Americans today.

"Our citizens live in freedom because patriots are willing to serve and sacrifice for our liberty," Mr. Bush said Saturday in his weekly radio address.

On Monday, he will lay a wreath at Arlington National Cemetery to pay tribute to those he said made the ultimate sacrifice. He noted that this year marks the 60th anniversary of the end of World War II, a victory for freedom in which more than 400,000 Americans gave their lives.

"Today a new generation of Americans is making its own sacrifice on behalf of peace and freedom, and some have given their lives," he said.

On Friday, Mr. Bush traveled to Annapolis, Md., to tell the graduates of the Naval Academy that the nation needs them to take on two difficult missions: defeat the terrorists and transform the U.S. military to meet the threats of the 21st century.

"These new officers will soon be serving on ships, flying combat missions, and leading our troops into battle against dangerous enemies," Mr. Bush said in his radio address. "They are prepared for the challenges ahead — morally, mentally, and physically. The American people can be confident that their freedom is in good hands."

Retired Army Gen. Wesley Clark, who was a candidate for the 2004 Democratic presidential nomination, said in the party's broadcast Saturday that Memorial Day recalled personal memories.

"This Monday, I will be remembering those in uniform who served in World War II and Korea and inspired me to enter military service in 1962," Clark said. "Like many others of my generation, I will also be remembering the many times I visited the Vietnam Veterans Memorial in Washington. I will remember those who selflessly gave their lives and paid the ultimate price so that we could live in freedom."

Clark also used his address to insist that Reserve and National Guard members receive health insurance for themselves and their families through TRICARE, the military's health care system, just as the active force does.

"And just as importantly, we have got to keep our promises to veterans and provide them the medical care they need," Clark said. "That means fully funding the Veterans Administration system."