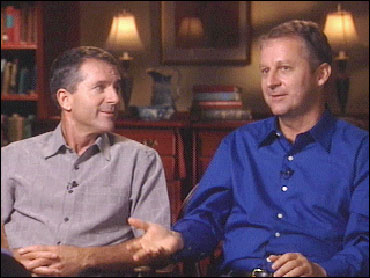 Imagine waking up one morning to find that almost everything you knew about yourself was wrong -- your religion, your family history, even your bank account.

As 60 Minutes correspondent Scott Pelley first reported in 2003, that's what happened to Chris and Rich Andrews, brothers who were raised on welfare by a single mother suffering from mental illness. When she died, they were left with nothing, or so they thought.

It took 30 years before they learned that the truth about them had been buried in the past.

Chris and Rich Andrews knew that their mother loved them, but they knew very little about her past.

Born in Austria into a family of privilege, Elizabeth was, by all accounts, a happy, carefree child. But the fairy tale ended in California when Elizabeth, at the age of 45, committed suicide. She was penniless, divorced, and the mother of two teenage sons.

"My most vivid memory is sitting there with a priest in a very small room and him saying to the two of us, 'You're gonna have to grow up.' And I remember thinking, 'Well, sure,'" says Chris.

And so they did. The brothers married, had children, and pursued careers - Rich as a tennis pro and Chris as an entrepreneur.

Then on July 2, 2001, 30 years after their mother's death, a letter arrived from the Hoerner Bank in Germany, stating that it specialized "in the search for missing and unknown heirs." They also informed Chris and Rich they had inherited some unclaimed property, real estate valued at more than $400,000, which they later found out was in Vienna.

"I thought this was kind of like the place we grew up in ... Home or apartment. You know, tiny. Modest at that," says Chris. "We found, I don't know, they call it a palace there."

It's not really a palace, but it's close: a princely edifice located at Schmidgasse 14, in one of Vienna's most fashionable districts.

Rich said that they asked the guard if they could have a look around inside the building, but were denied access. Although they later got in, it wasn't the Austrians who were keeping them out at the time. It was somebody much closer to home.

The building's tenant is the United States government. In fact, a section of the American embassy is there.

So how did our country end up in their building? The story begins with a Viennese genealogist and consultant to the Hoerner Bank named Herbert Gruber.

Gruber is in the business of finding long-lost heirs to properties that were seized by the Nazis. Gruber, acting on a hunch that Schmidgasse 14 might be one of those properties, set about finding the original title-holder.

"I discovered that the owner was a physician, Dr. Lothar Furth. The building used to be a hospital," says Gruber.

But it wasn't just a hospital. The Sanitorium Furth was one of Europe's toniest clinics. Sigmund Freud studied medicine with its founder, and luminaries like the Maharaja of India went there for treatment.

So how did Gruber track down its heirs after all these years?

"Piece by piece, like a puzzle, the information came together," says Gruber. "I found out that most of the family had survived the Holocaust."

It turned out that Dr. Lothar Furth was the cousin of Chris and Rich Andrews. He was part of a prominent Jewish family that lived in Vienna before World War II. Because of the rise of anti-Semitism there, some had converted to Christianity.

Chris says he wasn't raised with any religion, but he remembers going to Sunday school a few times as a child.

On March 13, 1938, Adolf Hitler entered Austria. "As Führer and Chancellor of the German nation," Hitler said that day, "I witness for history the entry of my homeland, Austria, into the German Reich."

The 'Anschluss,' as it was known, whipped Austrian citizens into a frenzy of delirium, and a frenzy of anti-Semitism. Jews were mocked, threatened, and publicly humiliated – and among them was Dr. Furth, the owner of Sanitorium Furth. According to a relative, he and his wife were forced to clean the sidewalk outside Schmidgasse 14 with their tongues.

Shortly after that awful day, just three weeks after the Nazis had marched into Vienna, Furth and his wife killed themselves. They injected themselves with poison inside Schmidgasse 14. Furth left a suicide note that said simply, "We have had enough. It is my fault, but I am just tired. I kiss everyone who loves me."

"It changed our lives," says Rich. "For some reason, we really didn't know that our family was Jewish."

They also were not aware that Furth was their mother's cousin, one of the many secrets she took with her when she fled Europe as a teenage girl with her parents shortly before Hitler entered Austria. Among those secrets was the story of Schmidgasse 14, where their mother was born.

Schmidgasse 14 was seized by the Nazis, who occupied it until the end of the war. The wholesale seizure of Jewish property is something Ariel Muzicant knows a lot about. He's head of Vienna's Jewish community and one of the biggest realtors in Vienna.

In the case of Schmidgasse 14, they rented it out as office space to the United States of America in 1958. More than 40 years later, in 2001, the U.S. spearheaded a restitution agreement between itself and Austria that gave Holocaust victims and their heirs the chance to reclaim stolen property.

Are there other Furth properties that Gruber discovered?

"Many family members lost relatively high valuables, such as a chemical plant, significant bank accounts, other items of value," says Gruber. "The total value would be around 20 million euros."

That's about $25.3 million, most of which will never be returned because of the limited amount of money provided by the restitution agreement and the large number of people applying for it.

But to Chris and Rich Andrews, the money was never the point.

"We found out that our great grandfather owned the match monopoly in the Hapsburg empire. Our grandfather owned a brewery. They owned all kinds of other things," says Chris. "But it wasn't so much the wealth. It was, oh, they were people of conviction. They were people who went out and did things. And that, and I started to say to myself, 'Well my family helped build Vienna.'"

Lothar Furth and his relatives were once described as "aristocrats of merit, vigorous and assured, at ease with diplomats, with professors of philosophy, with the great physicians and artists." And not all of them have perished.

In a story full of revelations, perhaps the most surprising is that Chris and Rich Andrews are not the only living Furth heirs. In researching this story, 60 Minutes discovered that another branch of the Furth family is alive and well on the east coast of America - a branch of the family that Chris and Rich never knew about. One of them is Alfred Strasser, who recalls listening to the radio as an 11-year-old on March 13, 1938, the day of the Anschluss.

"I was crazy about classical music, and the Vienna Philharmonic was broadcasting Schubert's Unfinished Symphony," recalls Strasser. "And it was interrupted to announce that the German troops had crossed the Austrian border."

Another Furth relative is 96-year-old Eva Perl, Furth's first cousin. She was born at Schmidgasse 14.

All of the surviving Furth relatives have put in claims for the family holdings seized by the Nazis. But as Muzicant told Pelley, Schmidgasse 14 poses an especially difficult problem. If the relatives get the building back, will they be able to throw the Americans out?

No, says Muzicant, "because they are protected under rent control. This is the law."

In U.S. dollars, the rent comes to about $2,500 a month, a very reasonable amount. Muzicant says it's "peanuts for such a building."

When 60 Minutes asked the State Department about Schmidgasse 14, they sent this reply: "The question of the building's disposition is an issue between the government of Austria and those claiming ownership. We will take the appropriate action depending on the ultimate disposition of the property."

As for Chris and Rich Andrews, having a building to call their own is not nearly as important as having their own family. But we couldn't end this story without bringing together these two branches of the Furth family for the very first time.

"We lost our mother over 30 years ago and we found out that the closest thing in terms of a real family, who had a life like hers, and that is a family that we're about to meet," says Chris. "Rich and I decided if nothing ever comes of this – this gift to us has just been extraordinary."

Although they didn't know it at the time, the Andrews and their new found family would have another reason to celebrate.

Late last year, an Austrian arbitration panel ruled that Schmidgasse 14 was being returned to the heirs of Lothar Furth and the U.S. State Department announced that it would vacate the building.