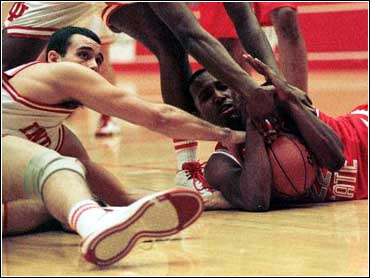 Michael Redd and the Ohio State Buckeyes muscled their way past the Indiana Hoosiers.

Redd scored a season-high 28 points, including five free throws in the final two minutes, as No. 7 Ohio State held off No. 10 Indiana 82-71 in their foul-plagued Big Ten showdown.

The 6-foot-6 Redd said he felt confident no matter who Indiana used to defend him..

"Those were great matchups for me. Newton - I can get past him. Fife is too small. I can post him up or shoot over him," Redd said.

Officials called 58 personals with four Buckeyes and two Indiana players fouling out. The teams combined to shoot 87 free throws and misses proved costly to the Hoosiers, who went into the game leading the Big Ten in free throw accuracy.

"We kept attacking. We knew we couldn't slack off," Redd said. "In the first half they shot like 30 (26) free throws. In the second half the roles were totally turned around. We were in the bonus for most of the second half, and coach kept telling us to keep attacking, that you will get fouls, get to the rim, and it happened."

A.J. Guyton led Indiana with 27 points, becoming the fifth player in school history to score 2,000 points. He finished the game with 2,007.

Guyton matched his career high of 11 free throws in 12 attempts. However, he had ony one point in the final 13 minutes as fatigue appeared to set in.

"We just played him physical. We shadowed him the whole game and the second half I think it wore him down," Redd said.

"This is an incredible win for our guys," said Ohio State coach Jim O'Brien, whose team had lost to Michigan State 83-72 on Tuesday. "We thought we really needed to get something back after a disappointing loss at home. In my mind, I thought this game had a lot of very important implications."

The Spartans lead second-place Purdue by a half-game and Ohio State took over sole possession of third place, one game behind Michigan State with four to play.

"We did a great job of being physical, being aggressive all night long," Redd said. "I love it when our backs are to the wall. It brings the best out of you."

"Ohio State was the best team that we've played this year. We played hard, really scrapped and scraped," Indiana coach Bob Knight said. "The difference, I think from our standpoint is we played a 30 minute game and Ohio State played a 40 minute game. They really beat us pretty good in the last 10 minutes."

A 3-pointer by Guyton gave Indiana its biggest lead of the game at 52-45 with 13:32 to play. Ohio State charged back to tie it at 53 on a putback off an offensive rebound by Ken Johnson.

Three consecutive 3-pointers by Brent Darby, who made all four of his shots from behind the arc, gave Ohio State a 69-63 lead. The Buckeyes scored their final 11 points on free throws.

Redd had hit a jumper to put the Buckeyes ahead for good at 55-53 and both teams did most of their scoring on free throws in the final 10 minutes.

Indiana overcame an early poor-shooting effort to trail 36-35 at halftime. The Hoosiers hit just one of their first eight shots from the field and the only five of the first 12 free throws.

The loss was the first in conference play at home for Indiana, which has lost three straight against the Buckeyes. The victory in Assembly Hall was only the second in nine trips for Ohio State.