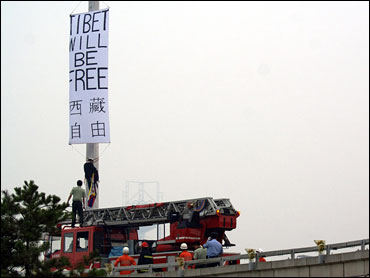 While you were watching Michael Phelps splash through to more gold medals, and while you witnessed the women's gymnastics team wobble toward a silver, a British reporter for ITN was getting manhandled less than a mile from the Birds Nest.

John Ray is the China correspondent for ITN. He was covering a pro-Tibet rally when Chinese police confiscated his equipment and detained him. Before winning the rights to the games the Chinese promised their country would be open to the press.

So there are designated protest zones in Beijing where people can theoretically exercise free speech. Small problem - you need a permit to protest. The pro-Tibet protestors didn't get one so their appearance was illegal as far as the Beijing cops were concerned.

They were rounded up along with Ray who somehow thought that having been credentialed as journalist meant he could cover the news. In China, even now, the news is what the regime says it is.