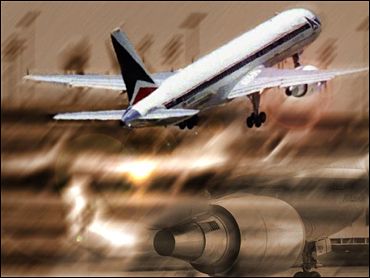 British Airways is considering fitting its aircraft with anti-missile systems and has begun talks with manufacturers Boeing and Airbus about adapting the technology to commercial planes, the airline said Friday.

"We're currently talking to airline manufacturers to understand the feasibility of deploying anti-missile systems on civilian aircraft," a spokesman for BA said, speaking on condition of anonymity.

"There are a number of issues to be resolved, including whether the current technology in use on military aircraft can be adapted to be used on civilian aircraft," the spokesman added.

He wouldn't say whether there was a particular anti-missile system BA was considering or a company whose technology it was interested in using.

Last month, BA suspended flights to Saudi Arabia after local authorities broke up a terror cell that reportedly was plotting an attack on a British plane. At the time, Britain's Department for Transport said it had received "credible intelligence of a serious threat to U.K. aviation interests in Saudi Arabia."

The airline announced on Friday that it was resuming service to Saudi Arabia this weekend.

Britain lifted its ban Thursday on flights by British airlines to Mombasa, Kenya's Indian Ocean port. On Nov. 28, surface-to-air missiles were fired at an Israeli charter that was taking off from Mombasa airport, narrowly missing the plane filled with homebound Israelis. Almost at the same time, a car bomb exploded in a hotel north of Mombasa, killing three Israeli tourists and at least 10 Kenyans. The attack has been blamed on al Qaeda.

In the United States, lawmakers have proposed a bill to equip 6,800 U.S. airliners with some form of anti-missile device, at an estimated cost of $10 billion. El Al, the Israeli airline, is believed to have anti-missile technology on its passenger aircraft.

Hundreds and perhaps thousands of Soviet-style SA-7s — heat-seeking rockets that can hit low-flying aircraft within 3 miles — are said to be available on the worldwide arms market.

BA said that although it was looking into using anti-missile systems, it regarded improved security measures on the ground as the best way to reduce the threat from terrorism.

"Where there is a risk, we believe the most effective prevention is for the relevant authorities to identify any likely launch sites near airports," the spokesman said.