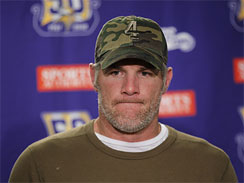 Brett Favre's streak is over. His career might be, too. Favre stood on the sideline for the start of a game for the first time since 1992, rubbing his salt-and-pepper beard in frustration because his body couldn't take another pounding. The New York Giants made sure his replacement struggled early and often in a 21-3 victory over the Minnesota Vikings.

"I am not going to play again if I can't feel my hand," the 41-year-old Favre said after sitting out with a right shoulder injury that has made his hand numb. His NFL record streak of 297 straight starts was finished, and Favre couldn't say if he would suit up again.

"That's questions I haven't thought about, to be quite honest with you," he said. "I've always assumed I'd play every game, today was no exception. I enjoy playing.

"I don't want to say I'm shocked by the events of today. I guess in some way I expected it ... but I have no idea. It's unfortunate we're out of this playoff race. I'll just see how I feel this week and go from there."

"But I'm hoping not," Frazier said.

Brandon Jacobs ran for a go-ahead touchdown midway through the second quarter, Eli Manning threw a lead-padding TD just before halftime and Ahmad Bradshaw added a 48-yard run for the Giants. The game was moved from Minneapolis to the Motor City because the Metrodome roof collapsed under heavy snow early Sunday.

Manning, whose brother, Peyton, now has the longest starting streak for a QB at 205 games, said he was shocked when he found out Favre was inactive.

"You don't know if this is the end for a guy who has done so much for the NFL," Manning said.

The Giants sacked Favre replacement Tarvaris Jackson four times, knocking him out of the game late in the third period and again in the final seconds.

New York (9-4) moved back into a first-place tie with Philadelphia in the NFC East. The Giants have won three straight and eight of 10 games, improving their chances for a wild card if they doesn't finish ahead of the Eagles, who they host Sunday.

"We're going to have to be resilient again this week because we've got a short week before a big game against the Eagles," Giants coach Tom Coughlin said. "They had a nice win yesterday, and we had to match them."

The Vikings (5-8) were eliminated from the playoff race after entering the game with a two-game winning streak and flickering hopes of salvaging what has been a miserable season that started with high hopes after Favre led them to the NFC title game.

The game was switched from Sunday afternoon when the Giants couldn't get to Minneapolis because of the severe weather, then was pushed back another day and moved to the Detroit Lions' indoor stadium with a steel roof. The Vikings were technically the home team at Ford Field — which was adorned with their logo at midfield and "VIKINGS" in the end zones — but they didn't have much of an edge.

Nothing, though, was more odd than seeing Favre watch a game.

He stood on the sideline, trying to tutor Jackson at times, and sported a purple knit hat, short-sleeved black shirt with a long-sleeved white shirt underneath and black warmup pants.

"It's been a great run, I will not hang my head one bit because it ended today," Favre said. "I think about as a kid goals and dreams, I have far exceeded all of those. I never dreamed of playing 300-plus straight games (including playoffs). I dreamed of playing in the NFL."

The game drew an announced crowd of 45,910 — there seemed to be at least 10,000 more people in the 65,000-seat stadium late in the first half — and some fans made the trek to specifically see Favre.

"I'm devastated," said 20-year-old fan James Burton, who left his home in Ohio at 3 a.m. ET Monday to get one of the 30,000 free tickets that were distributed.

Even though most got in for free, they left disappointed, especially if they were rooting for the Vikings.

Jackson got off to a good start, completing his first two passes for 8 yards each, but didn't do much to help his team for the rest of the night.

"I was very pleased with the way the defense bailed us out after two early turnovers," Coughlin said.

Jackson wasted an opportunity to show his coaches and teammates he can be counted on to fill in for Favre for a game and perhaps in the future.

He completed just 12 of 22 passes, threw an interception directly to linebacker Keith Bulluck, and fumbled a shotgun snap he was able to recover. Another shotgun snap got away and he recovered it near the goal line, seemingly getting a break from the officials on what appeared to be a safety.

Jackson limped off the field with 16 seconds left in the game, giving rookie Joe Webb another opportunity to take snaps after getting drafted in the sixth round to play wide receiver. Jackson leaned heavily on a railing to get up steps toward the locker room.

While Jackson didn't have the benefit of a running game — Adrian Peterson was held to 26 yards on 14 carries — Manning relied on a one-two punch that pounded the Vikings all night.

Jacobs ran for a season-high 116 yards — including a career-high 73-yard run — and a score. Bradshaw had 103 yards rushing, including the 48-yarder that was his longest run in two years, before leaving the game with a wrist injury in the fourth quarter.

Manning bounced back from throwing a second interception in the opening minute of the second quarter by completing 22 of 37 passes for 187 yards and a TD on a perfectly threaded pass to Kevin Boss. That put the Giants ahead 14-3 with 3 seconds left in the third quarter.