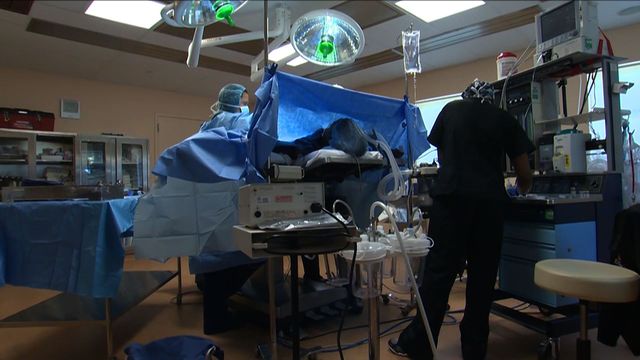 Breast-lift rates have climbed 70 percent since 2000, according to a new report from the American Society of Plastic Surgeons.

The most-common cosmetic surgery in the country remained breast implants or augmentation, with more than 290,200 people undergoing the procedure last year. But the breast lift procedure is increasingly popular, with its growth outpacing breast implant surgeries 2-to-1 since the start of the decade.

Another 23,770 individuals underwent breast-implant removals in 2013.

In a breast lift, excess skin is surgically removed and the surrounding tissue is tightened to reshape and raise the breasts. Pregnancy, breast-feeding, weight fluctuations, genetics and aging could cause changes in skin elasticity, according to the society.

Nearly 70 percent of cases last year involved women between the ages of 30 and 54.

"The ideal candidate for a breast lift is a woman who has a good amount of breast tissue left, who doesn't necessarily want to have implants," said society president Dr. Robert X. Murphy, said in a statement. "Many women aren't sure if they are a candidate for this type of surgery, but a simple pencil test can tell them if they are." If a pencil placed under the breast remains in place, a person may be a candidate for a lift, he explained.

The procedure will not change the size or round out the breasts, according to ASPS.

The procedure poses risks including scarring, changes in breast or nipple sensation, irregularities or asymmetry and in rare cases difficulty breast-feeding or damage to tissue in the nipples or areolas, the Mayo Clinic notes.

Like any surgeries, other risks include bleeding, infection and adverse reactions to anesthesia.