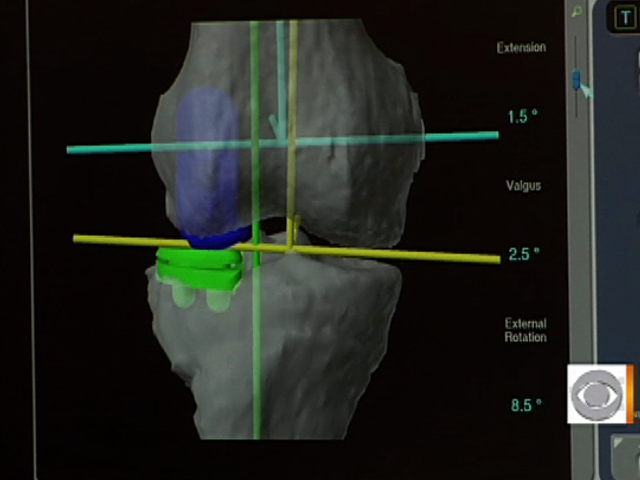 Do you think knee replacement surgery means a major operation, followed by weeks of excruciatingly painful rehab? Well, think again: A breakthrough procedure has some patients back on their feet and nearly pain-free the next day.

"I play golf and I'm semi-retired and that's all I do," said Gordon Morrice, 77, a lifelong athlete and avid outdoorsman. He even climbed Mount Kilimanjaro. But last year, the pain in his knees grew so intense, it hurt to get out of bed.

"My knees were hurting so badly I couldn't do anything," Morrice says.

He had one total knee replacement, but the recovery and rehab were extremely painful.

"Worst pain I ever experienced in my life, really," he recalls.

Despite the lengthy and painful rehab, Morrice was about to have his second knee replaced when surgeon Dr. Paul Sasaura told him about a procedure called makoplasty, a computer-guided, robot-assisted, partial knee replacement.

"The precision of the robotic arm is so much more accurate than what the human body can do," explained Dr. Sasaura.

Using a 3D model of the knee taken by a CAT scan, the doctor guides the robot arm. The diseased portion of the knee is "resurfaced", sparing as much of the patient's healthy bone and surrounding tissue as possible.

According to Dr. Sasaura, "Resurfacing is basically taking away the worn out cartilage and a little bit of bone and replacing that part with metal and plastic."

Operating with such precision was impossible before. And since it's also minimally invasive, recovery is much quicker.

"It was just as easy as could be," Morrice says. "I had the operation on Wednesday. I came home on Thursday. I was at the golf course on Friday."

Morrice's surgery has truly let him get back in the swing.

"To have your knee back is pretty remarkable, and I feel very grateful for that," he says. "I'm able to move around now pain free."