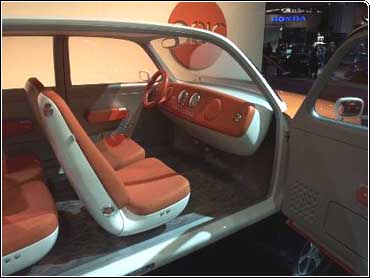 The auto industry is in the middle of a huge technical revolution, reports CBS News Correspondent Drew Levinson from the North American International Auto Show 2000 in Detroit.

Ford has unveiled its new 24-7 concept cars, featuring a voice-activated system that brings the Internet inside the car, with information available 24 hours a day, 7 days a week. Buick's Lacrosse has a computer-type mouse on the console that allows the driver to check on the car's performance and choose his entertainment with a click.

Missing from the dashboard are things most people are accustomed to, like a speedometer and fuel gauge.

In the Ford, driver information is displayed in a "head's up" display, which can be read without taking eyes off the road.

Though the automakers are touting the fact that their cars are connected to the world, they haven't forgotten that the cars still have to move, so the quest for cleaner fuel continues. BMW already has a car that runs on hydrogen power and that means no emissions.

There are two problems with the vehicle. First, hydrogen costs ten times that of gasoline. Second, there's only one hydrogen fuel station in the world at present, and it's in Germany.