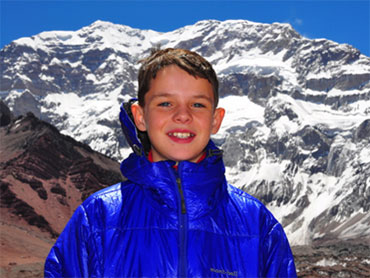 If all goes according to plan, late today 12-year-old Matt Moniz will reach the summit of Mauna Kea, Hawaii's highest point at 13,796 feet.

While this is quite a feat in and of itself, when Matt reaches the top of that inactive volcano, he will have topped off another amazing feat: having climbed the 50 highest peaks in all 50 states, in fewer than 50 days.

"It's been an amazing experience," Matt told CBS News from his Boulder, Colo. home before his flight to Hawaii. "It's a big risk, but we take it seriously and make sure all of our gear is right."

Backed by corporate sponsors and running more than a week ahead of schedule, Matt, his father and a support team are on-track to break the speed record for climbing all 50 peaks. The clock started ticking on June 3, when they reached the top of Mt. McKinley in Alaska.

Since then, they have criss-crossed the country to the tallest point in every state. They made it to the top of six of the smaller peaks in one day. Other peaks have taken several days to climb.

"It kind of evens out," Matt said.

He is climbing to raise money for his best friend, 10-year-old Ian Hess, who suffers from pulmonary arterial hypertension, a disease that restricts blood flow to the lungs, resulting in breathlessness and fatigue. He compared the disease to feeling like you have high-altitude sickness all the time.

"We're trying to raise awareness so either we can get a cure or we can raise money for all the bills," Matt said.

This isn't the first time Matt has climbed for this cause. Last summer, he climbed all 14 of Colorado's 14,000-foot peaks. His adventure was featured on "The Early Show".

"I couldn't be more happy," said Matt's father, Mike Moniz. "I'm sure it will fill the rest of our life with great stories and memories."

After the climb, Matt and his family plan a week of rest on Hawaii's beaches. His next adventure: seventh grade.